Moon made the remark as he presided over the first meeting with senior secretaries in the new year. The president also said that raising the minimum wage is a way to realize income-led growth through increasing household income and expanding domestic demand.

Critics and opposition parties have raised concerns that steep hikes in the minimum wage could be a burden to businesses amid economic difficulties and could actually be bad for low-income workers since their employers could fire them. 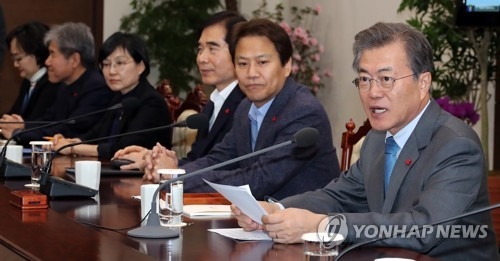 "Raising the minimum wage is a policy that must be carried out for the sake of addressing extreme income inequality and ensuring a life worthy of a human being for low-income workers," Moon said. "There could be confusion in the early stages of a hike, but in the long term, it will be a big help in making our economy healthy so that it can achieve sustainable growth."

Moon acknowledged that raising the minimum wage could be a burden and cause difficulties for small business owners as it leads to an increase in personnel expenses, and he instructed aides to try to minimize such negative effects.

He also ordered officials to come up with measures to lower the rent for small shop owners and ensure that the hike in the minimum wage won't lead to layoffs of such vulnerable workers as janitors and apartment security personnel.

"Cheong Wa Dae should consider forming a job security team to make sure that government measures are properly implemented on the ground," Moon said.
(END)