SEOUL, Jan. 8 (Yonhap) -- INFINITE returned with its third studio album, "Top Seed", on Monday, marking the first major K-pop boy band release of 2018 as well as the group's first record after being downsized into a six-member act.

"In sports, top seed refers to the highest ranking team (in a tournament). We named the album in the spirit of that meaning. We hope our album becomes the best album," leader Sungkyu told reporters during a media showcase at Blue Square Hall in central Seoul.

"Top Seed" is INFINITE's first new album since "Infinite Only," its sixth EP album, released in September of 2016. Outside of releasing a live album late last year, the band ended up taking a 16-month break, a long hiatus in terms of K-pop release cycles. It's also INFINITE's first release since the departure of member Hoya in August of last year. 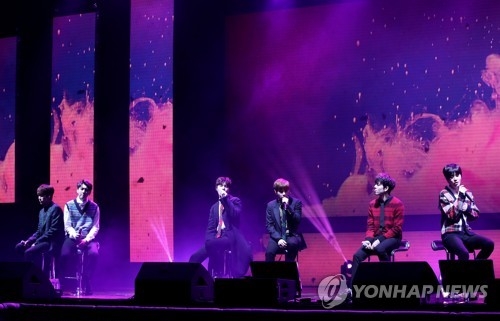 After their exclusive contract with management company Woolim expired in June of last year, the remaining six members -- Sungkyu, Dongwoo, Woohyun, Sungyeol, L and Sungjong -- renewed their contracts with the agency.

"Top Seed" is packed full with 14 brand new tracks of varying genres, including ballad, dance and rock, and is led by lead track "Tell Me," a mid-tempo synth ballad with dynamic string arrangements. Member Dongwoo explained that the album was originally conceived as an EP but was later expanded into a full-length album, as the group wished to include more tracks.

"We have tried new styles in our music. For example, there are songs that start off with hooks as well as other changes," said Dongwoo.

Apparently conscious of its reduced lineup, the group said it tried to pack the album with songs that emphasize its strong teamwork.

"I think our product has come out well ... while we do have solo songs in the album, we tried to create an album that best shows the harmony of the six members," Woohyun said.

The group admitted that Hoya's departure was painful for them but said they respected the departed singer's choice.

"Life is a series of choices. We respect Hoya's choice. I was at Sungkyu's house when I heard about Hoya's departure. I remember crying while talking on the phone," Dongwoo recalled.

The singer added, "Though we're now a six-member act, I think we went through a period of growing pains, and we've reflected our experience in the new album."

Member L said that the group's comeback was delayed because the team wanted to emphasize growth and maturity from their comeback project after Hoya's departure.

"We wanted to maintain familiarity while also showing more a mature side of the group, including in self-produced solo tracks in the album. That's how we ended up having various genres on the record," said L. 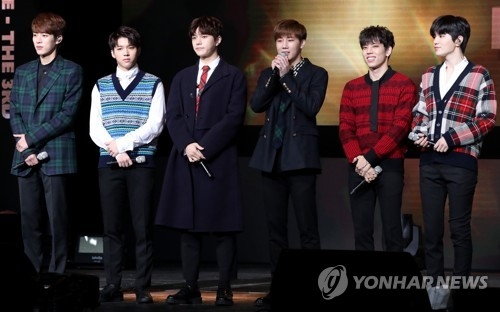