SEOUL, Jan. 8 (Yonhap) -- U.S. tech giant Google Inc. came under fire Monday for describing a victim of Japan's sexual slavery during World War II as a "prostitute" in its Korean-based search engine, which the firm claims was caused by an "error" in its algorithm.

Earlier Monday, Google's search engine described the late Moon Ok-ju, an activist and victim of Japan's enslavement of Korean women, as a "prostitute" on its Korean-language platform.

In an official statement, Google said its search results may differ from actual facts and claimed that search results are produced automatically through its algorithm. The description was removed after the matter came to light.

The company said it will continue to make efforts to improve the quality of its search engine. The U.S. company, however, did not provide details on how its search algorithm led to the latest controversy.

Moon, who passed away in 1996, spent her life standing up for victims after being taken to China and Myanmar by Japanese forces during the war. Historians estimate that up to 200,000 women, mainly from Korea, were forced to work in frontline brothels for Japanese soldiers.

Moon's detailed testimonies are considered to have played a great role in revealing the truth behind Japan's enslavement of women. 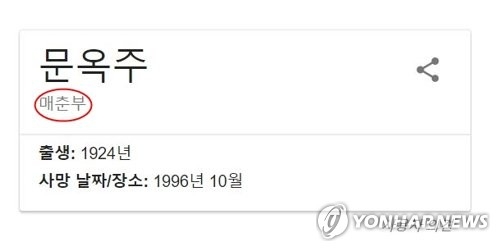 Google under fire for referring to wartime sex slave as 'prostitute'

Google under fire for referring to wartime sex slave as 'prostitute'