In an interview on Radio America's "The Dana Show," Pence was asked to assess the U.S. role in bringing the two Koreas together Tuesday to discuss North Korea's participation in the PyeongChang Winter Olympics.

Trump took credit last week after the Koreas reopened a communication channel in the border truce village of Panmunjom, tweeting, "Does anybody really believe that talks and dialogue would be going on between North and South Korea right now if I wasn't firm, strong and willing to commit our total 'might' against the North." 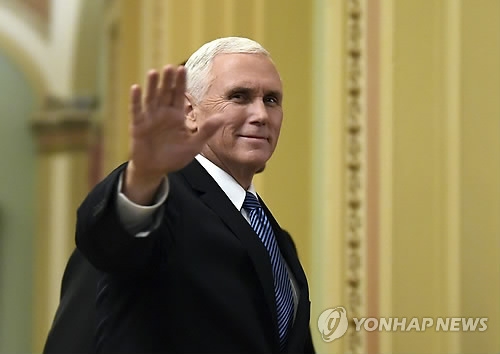 Pence said the U.S. will not relent until North Korea gets rid of its nuclear and ballistic missile programs.

He recalled that on his trip to South Korea early last year, he wanted to send that message to the North.

"When we arrived there at the Demilitarized Zone, the security team told us that we could stop inside and look out the windows," he said, referring to the heavily fortified inter-Korean border.

"And I said, 'That's not what I came here to do.' I walked outside. I wanted to look those North Korean soldiers in the eye, and I wanted to project the resolute determination of President Trump and the United States of America to stand by our ally in South Korea, and to continue to stand for a nuclear-free Korean Peninsula. And I hope we helped convey some of that message," he said.

Pence expressed pride in the fact that his father fought in the 1950-53 Korean War for the freedom of the South Korean people.

"The progress that we're making is, to your point, a direct result of the clear and strong and unambiguous leadership that President Trump has been providing, and we're going to continue to provide until North Korea finally and lastly accepts the universal opinion of the civilized world that they must abandon their nuclear and ballistic missile programs and stop threatening the world," he stressed.