Five of the top 10 apps from January to November last year were those referred to as fintech, short for financial technology, apps. Toss, an app for mobile remittances, grew 111 percent in the number of users during the period. KB Kookmin Card came next at third, gaining 55 percent. Hana Members followed with 50 percent, Samsung Pay with 48 percent and Hana 1Q Pay with 37 percent.

Among non-fintech apps in the top 10, the one operated by the convenience store chain GS25 made it to No. 2 with 63 percent. This app allows shoppers to store their purchased items at the store for pickup at their own convenient time.

The most-used app among those released last year was that for the Internet-only lender Kakao Bank, which had 3.68 million users as of November.

By sector, Kakao Talk was the clear winner in communication with 29.3 million users as of November. It was followed by Facebook Messenger at 5.28 million users and Naver's Line with 2.27 million users.

For portal apps, Naver topped the list with 21.59 million users. Google was next with 20 million, followed by Daum with 8 million. 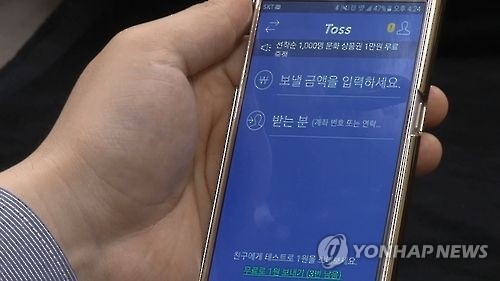