The International Centre for Sports Studies (CIES) Football Observatory ranked players in the five major European leagues -- in England, Spain, Italy, Germany and France -- based on their transfer values. The research group said the evaluation took into account players' age, position, contract duration, performance and international status, among others.

Son came in at 56th place with 72.6 million euros (US$86.9 million), up from the 44.8 million euros that placed him in 69th last year. Son also topped all Asian players on this year's rankings. 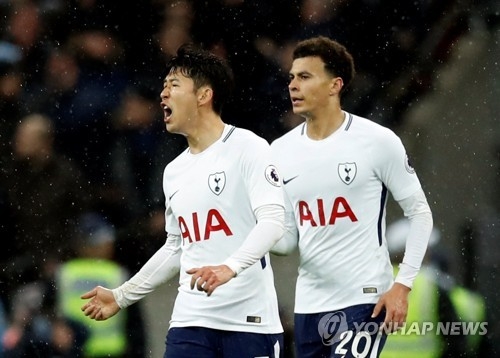 The skilled attacker enjoyed a strong 2016-2017 season for the Spurs, scoring 21 goals to set the European single season scoring record by an Asian player. He has picked up where he left off, with 10 goals in all 2017-2018 matches so far.

Kylian Mbappe of Paris Saint-Germain and Paulo Dybala of Juventus rounded out the top five.

The CIES is an independent study center based in Neuchatel, Switzerland. It was created jointly by FIFA, the University of Neuchatel and the city and state of Neuchatel in 1995.