To this end, the countries have agreed to launch a new Two Plus Two dialogue involving their foreign and defense officials, according to Park Soo-hyun, a spokesman for the South Korean presidential office Cheong Wa Dae.

"Normally, a Two Plus Two dialogue is held between allies," he told a press briefing.

An official from Cheong Wa Dae earlier said Al Mubarak was returning a trip by Im on Dec. 10 to Abu Dhabi, when he paid a visit to the Crown Prince. 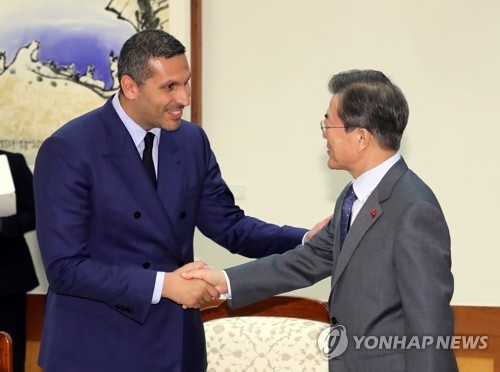 The UAE official expressed hope that the countries will further enhance their bilateral ties in the energy and electronics sectors, according to the Cheong Wa Dae spokesman.

"I must say, the fact that you, Mr. President, have made time to meet me shows how close and strong the bond between the two countries is," he said, adding he was aware how busy Moon and his government must have been on the day that also saw the resumption of inter-Korean dialogue.

Officials from the divided Koreas met earlier in the day for their first government-level talks in more than two years.

Al Mubarak also relayed a special message from the Crown Prince of Abu Dhabi, along with his invitation for the South Korean leader to visit the Middle Eastern country.

"Crown Prince Mohammed sincerely wishes for you, Mr. President, to visit the UAE, and is beginning to make all necessary preparations," he told the South Korean president, according to Cheong Wa Dae pool reports.

Moon accepted the invitation while extending his own invitation to the Crown Prince of Abu Dhabi to visit Seoul in the near future, according to Park.

"I hope we will work together to develop our countries' relationship into one of true brother nations, just as the name of the Akh unit means," he said, referring to the South Korean military unit that has been stationed in the UAE since 2011.