SEOUL, Jan. 9 (Yonhap) -- The organizing committee for the 2018 Winter Olympic Games said Tuesday it opened the main media working space in PyeongChang, where journalists around the globe will deliver real-time updates of the event to international audiences.

The PyeongChang Organizing Committee for the 2018 Olympic and Paralympic Winter Games (POCOG) said the Main Press Centre (MPC) will be located in the Alpensia Resort in PyeongChang, some 180 kilometers east of Seoul, near venues for ski events.

The games are scheduled for Feb. 9-25 in PyeongChang, and the adjacent sub-host cities of Gangneung and Jeongseon. The MPC will be open around the clock to provide necessary support, including telecommunication facilities and various amenities, to journalists.

Around 3,000 journalists from 58 countries are set to visit the MPC, along with 270 South Korean reporters from 68 local media, the POCOG said. 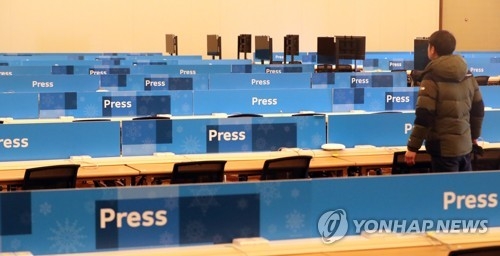 The MPC will be divided into three areas. MPC1 will host the main workroom with 400 seats for reporters and 100 seats for photographers, along with convenience facilities that include restaurants and lounges.

MPC2 is the press conference room with 500 seats, where the International Olympic Committee will host press briefings. The scheduled conferences will be interpreted into six different languages.

The third area will be leased to 33 media dispatching large numbers of staff, including Yonhap News Agency, South Korea's key newswire and host news agency of PyeongChang 2018, and other global giants, such as the Associated Press, Reuters, AFP, Kyodo News and Xinhua News Agency.

The committee also prepared a 180-seat "sub-media workroom" in Gangneung, which will host all ice events.

The five-story high IBC will house some 10,000 officials from 60 broadcasters around the globe, sending vivid videos of the event to the world. 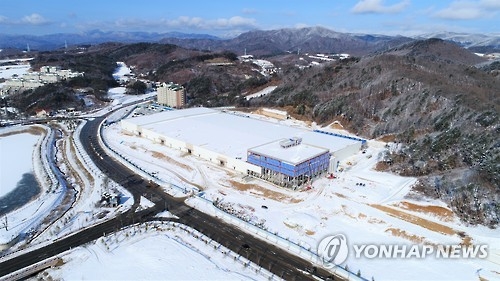