Paik Un-gyu, South Korean minister of trade, industry and energy, met with Khaldoon Khalifa Al Mubarak, chairman of the Executive Affairs Authority of Abu Dhabi, during his visit to Seoul to share the latest issues in the energy industry, the ministry said. 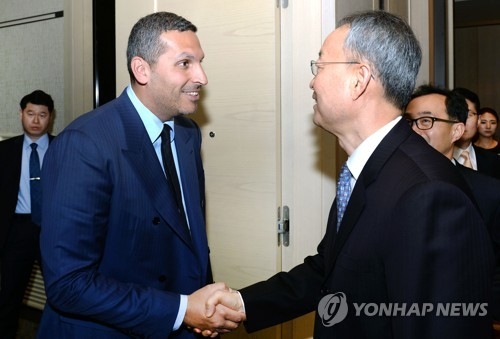 The state-run Korea Electric Power Corp. (KEPCO) has been building the UAE's first nuclear power station in Barakah in the country's western region under a 2008 deal.

KEPCO formed a consortium with Emirates Nuclear Energy Corp. (ENEC) to build four Korean-designed APR-1500 pressurized water reactors in Barakah, with one scheduled to begin operations within the first half of this year.

The two sides agreed to provide support for the project to successfully finalize the construction and start operations. When complete, the power station will deliver up to a quarter of the UAE's electricity.

"As the nuclear reactors will operate for the next 60 years, I proposed that the two nations have a future-oriented partnership that could last for a century," Paik told reporters after the meeting.

Related to the project, the policymaker proposed that the UAE jointly bid for Saudi Arabia's nuclear project, and Al Mubarak, also chairman of ENEC's board of directors, gave a positive response, the ministry said.

While South Korean opposition lawmakers have raised suspicions that the UAE government has complained about the nuclear project, Al Mubarack denied those rumors and expressed his satisfaction with the partnership with KEPCO.

The two countries also agreed to explore ways to collaborate in the solar power industry as Middle Eastern nations are increasingly seeking ways to increase their ratio of renewable energy, Paik noted.