SEOUL, Jan. 9 (Yonhap) -- Prime Minister Lee Nak-yon instructed the Cabinet on Tuesday to deal sternly with businesses capitalizing on the rise in the minimum wage to engage in unfair labor practices, such as cutting benefits, reducing working hours and laying off workers.

Lee made the remark at the start of a Cabinet meeting amid criticism that the raise in the minimum wage is causing negative effects, such as a rise in everyday prices and businesses laying off workers or reducing benefits citing the increase in personnel expenses.

Beginning this year, the minimum hourly wage was raised to 7,530 won (US$7) from last year's 6,470 won. President Moon Jae-in has pledged to raise the minimum wage further to 10,000 won before his presidency ends in May 2022.

"The government is well aware that the burden of small and medium-sized enterprises, small merchants and petty self-employed people will increase due to the rise in the minimum wage," Lee said. "But it is a grim reality that we can no longer do nothing about the low wages of workers ... and the steep polarization of income."

Lee noted, however, that some businesses appear to be using the raise in the minimum wage as a pretext to engage in unfair labor practices.

"I think it would be right for us to deal sternly with unfair labor practices, such as cutting benefits without consent from workers and reducing working hours," he said.

Lee also instructed officials to make sure to keep everyday prices in check and let more businesses know about state subsidies provided for them to help fund social insurance and other benefits for their employees. 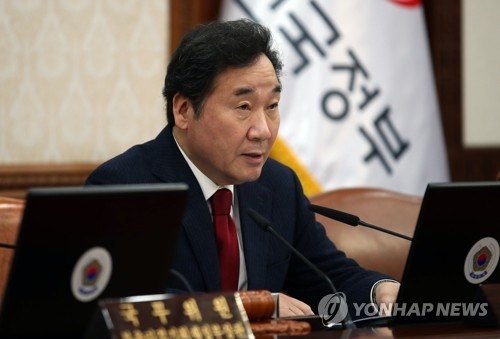