Their defections underscored deepening dissension over the proposed union with the People's Party that dissenters say cannot proceed due to different ideological roots and policy stances.

Kim's departure will reduce the total number of the party's lawmakers to 10, while the number of LKP lawmakers will rise to 117.

"I have mixed feelings while thinking of the citizens who have supported the Bareun Party, party members and colleagues," Kim said in a written statement. "Wherever I am, I will do my best there to help create a Republic of Korea that can better serve future generations." 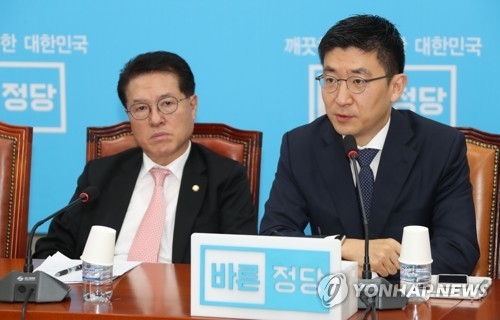 Kim's defection is yet another dispiriting blow to a campaign by People's Party leader Ahn Cheol-soo to rally centrist politicians and strengthen his party's parliamentary foothold ahead of the gubernatorial and mayoral elections, slated for June.

The campaign has also faced stiff resistance from within the People's Party. Some senior members argue that joining hands with the Bareun Party will obscure their party's political identity and alienate its supporters.

Earlier in the day, Gyeonggi Province Gov. Nam, another core member of the Bareun Party, voiced his opposition to the merger plan. He reiterated his commitment to unifying the fractured conservative bloc.

"I will not join the pursuit of a union between the People's Party and Bareun Party," Nam wrote on Facebook. "It is because I cannot be with a party that has divergent views."

The LKP said it would welcome both Kim and Nam as it seeks to strengthen its parliamentary presence to better keep the liberal ruling bloc in check and prepare for the June elections.

"We will not reject them. Come on board," LKP leader Hong Joon-pyo said.