She was told to spearhead the South and North Korean athletes who marched together under the Korean Peninsula flag during the opening ceremony of the Winter Games held on Feb. 10, 2006.

"I was surprised to hear the news from my coach," Lee, who was then 20 years old, told Yonhap News Agency on Tuesday. "I didn't expect the joint march and I never dreamed of myself as a flagbearer of the team at all."

It was the first time for the two Koreas to have a joint march at a Winter Olympics, although they had done so several times in other Games including the 2004 Athens Olympics.

They made the historic decision just a few days before the event took place and replaced their respective flag bearers with Lee and Han Jong-in, a North Korean male figure skater.

At the ceremony, the Korean delegation entered 21st out of 82 participating countries, with Lee and Han bearing the huge flag bearing the iamge of the Korean Peninsula at the front.

"The flag was very, very heavy," recalled Lee. "Jong-in took up the most of the weight. I just pretended to put my hands on the pole."

Since then, however, the South and North have failed to organize a joint march in any global sporting events due to protracted geopolitical tensions surrounding the region.

But with PyeongChang set to host the first Winter Olympics on Korean soil next month, hopes for a joint parade are high as the two Koreas are in an apparent thawing mode. On New Year's Day, North Korean leader Kim Jong-un expressed his intention to send a delegation to the Winter Games, which eventually led to the start of high-level inter-Korean talks on Tuesday.

"Even after 12 years have passed, the experience comes into my mind sometimes," said Lee, who now teaches young students in her hometown of Chuncheon, Gangwon Province, after retiring in 2015. "I want to see the South-North joint march again at Winter Olympic Games. It will be more meaningful as the Team Korea will be the last team in as the host country." 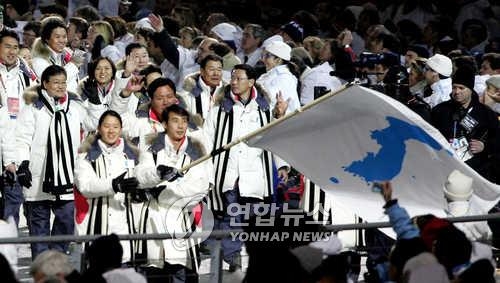