"We still expect Japan to accept the truth in accordance with universally accepted standards and keep making efforts to recover their dignity and heal the wounds in their minds... What the victims consistently want is a voluntary and sincere apology," she added. 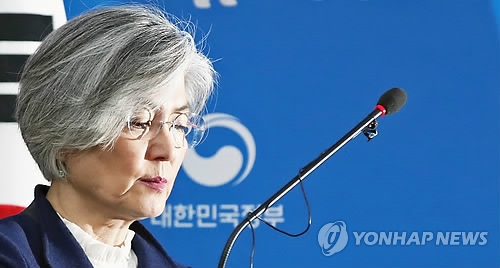 Moon criticized the deal as gravely flawed, saying it cannot resolve the comfort women issue. Kang earlier vowed to listen to all of the victims before finalizing the government's stance on the controversial deal, leading to speculation that the government could seek to renegotiate it.

According to the government, about 40 percent of Japan's contributed money has been accepted by victims.

The government's latest announcement highlights a dilemma that it has faced in handling the comfort women deal reached by the previous administration. The government is attempting to strike a balance where it does not damage bilateral relations with Japan by amending or withdrawing from the deal, but at the same time does not commit to implementing all of the agreement's terms.

Following the announcement in Seoul, Japanese Foreign Minister Taro Kono told reporters in Tokyo that Japan cannot accept the demand from South Korea. He earlier warned against any attempt to revise the deal, saying it could make their bilateral relations "unmanageable."

South Korea has said that it will take a "two-track" approach in which it will approach the historical issue separately from diplomatic and economic relations.

"What the victims consistently want is a voluntary and sincere apology. Our stance is that we will welcome the Japanese government showing sincerity on its own initiative in helping the victims regain dignity and heal their wounds," Noh Kyu-duk, foreign ministry spokesman, told a regular press briefing.