Seoul's foreign ministry announced a set of measures that include desisting from seeking a renegotiation of the deal and from using the money that Tokyo has offered to support the former sex slaves under the deal.

The ruling Democratic Party called the measures "effective," casting the deal as a "diplomatic fiasco" of the preceding government.

"President Moon Jae-in's apology for the secret deal by the dogmatic former Park Geun-hye administration and the foreign ministry's prompt measures are only for the victims and our citizens," Back Hye-ryun, the party's spokeswoman, said in a written press briefing. 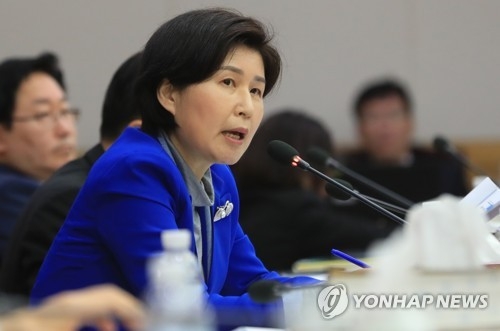 "For the future-oriented development of bilateral relations, we call for a change in Tokyo's attitude vis-a-vis the human rights issue of the comfort women," she added, referring to the victims who were forced by Japan into sexual servitude during World War II.

The main opposition Liberty Korea Party, however, railed against the measures.

"There is no tangible substance in the measures, as to what and how it will address the issue," Jun Hee-kyung, the party's spokeswoman, said.

The minor opposition People's Party lambasted Moon for failing to make good on his election pledge to seek a renegotiation of the deal.

Addressing the controversy over the deal has been a nettlesome foreign policy challenge to Moon, as many victims remain opposed to the deal, while a renegotiation could risk further straining ties with Japan, a crucial partner in reining in North Korea's nuclear threats.