INCHEON, Jan. 9 (Yonhap) -- The last two seasons were something of a struggle for South Korean slugger Park Byung-ho, who was mostly toiling in the minors of the Minnesota Twins system and awaiting a call-up that never came.

"It's great to see some familiar faces, and I feel really comfortable now," Park said at a press conference in Incheon on Tuesday, moments after arriving back from the United States. He agreed to a one-year deal worth 1.5 billion won (US$1.4 million) with the Heroes in November.

"I feel like I am right at home again. I think I can fit right into this ball club," he added. "My goal is to play every game of the 2018 season and play the kind of baseball I've wanted to play over the past couple of years." 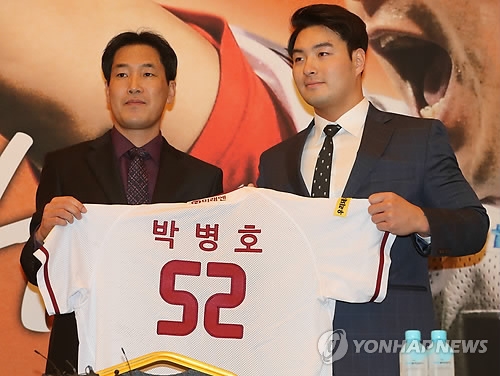 Park had played for the Heroes from 2011 to 2015 before signing a four-year deal worth $12 million with the Twins in December 2015. As the four-time home run king and RBI champion in the KBO, with back-to-back 50-homer seasons to boot, Park faced high expectations going into his first big league season.

But Park fizzled soon after a quick start and ended up playing 62 games in the big leagues in 2016, while hitting just .191 with 12 home runs and 24 RBIs. He was demoted to Triple-A Rochester in midseason and never returned to the majors the rest of the season.

Now back in a familiar uniform, with the same No. 52 on his back, Park said he's determined to start anew.

"I know a lot of my fans must be disappointed that I came back to Korea the way I did," Park said. "But I've made the decision to return and I'll have to live with it. I'll do my best to help the Nexen Heroes."

Park admitted that life in the minors, be it traveling or food, was difficult for him, and he said the difference between the minors and the big leagues is "night and day." The 31-year-old made up his mind to come home again after receiving a call from the Heroes' owner Lee Chang-suk, who suggested Park pack up and rejoin the KBO club. 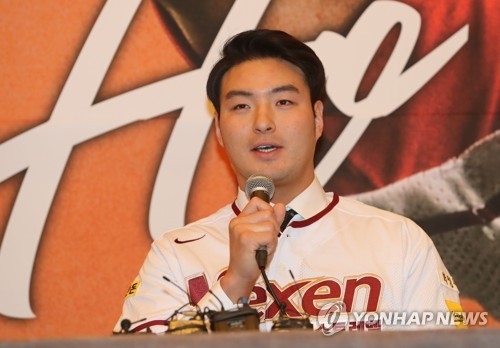 "I made this decision because I wanted to enjoy playing baseball again," Park said. "I don't know what kind of numbers I'll put up this year, and I am a little concerned because I haven't played in this league for two years. But since I am back with Nexen and not another team, I believe I can adjust right away."

Park enjoyed his best offensive year in his most recent KBO season in 2015, batting .343 with 53 home runs, 146 RBIs, 35 doubles, 181 hits and 129 runs scored -- all of them career highs. If he can come close to matching those gaudy stats, the Heroes could be back in postseason contention.

Park is joining a younger Heroes team than the one he left in 2015. And having moved from a hitter-friendly Mokdong Stadium to more cavernous Gocheok Sky Dome, both in Seoul, the Heroes have gone from a slugging squad featuring both Park and Kang Jung-ho, now of the Pittsburgh Pirates, to a slapping club that has hit more triples than any other team in the past two years, with 69.

Park will be hitting behind the likes of Seo Geon-chang, former league MVP and perennial .300 hitter, and the 2017 Rookie of the Year, Lee Jung-hoo, who batted a robust .324 and set a single season rookie record with 179 hits.

Though they were among the top five in team batting average and runs scored, the Heroes ranked eighth among 10 clubs with 141 home runs. And this is where Park can step in and make a difference.

"Even though the team didn't do as well last year as in previous seasons, we still have some good young players here," Park observed. "I hope we can be more productive offensively this year. And I understand what my role is. If the guys in front of me give me opportunities, I'll try to drive in as many runs as I can to help the team. 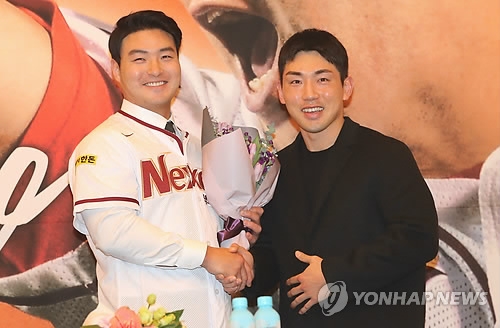 Reflecting on his U.S. stint, Park said he regretting losing his confidence while biding his time in Triple-A.

"I hit a lot of home runs to start my first season, but I didn't hit for a high average. I wanted to address that in 2017 and get a fresh start," Park said. "I had a good spring training and even after the team told me to start the season in the minors, I thought I'd have my opportunity to play in the majors again. But the unexpected (hamstring) injury early in the season threw me off, and I am disappointed I gradually lost confidence in myself."

Park said he was told on the last day of spring training in 2017 that he'd stay in the minors to start the regular season, but that he'd get called up in April. Then the injury happened, and Park said it took him longer than he'd expected to get his feel back at the plate.

Still, he doesn't see those two years as time wasted.

"Though I spent more time in the minors than the majors, I got to face a lot of really good players, the kind of players I'd never seen in Korea," Park said. "I think that was a really valuable experience."

Park is one of three South Korean players who have returned to the KBO after short stints in the majors, joining outfielder Kim Hyun-soo, who left the Philadelphia Phillies to sign with the LG Twins, and Hwang Jae-gyun, a third baseman who had a cup of coffee with the San Francisco Giants and then joined the KT Wiz this winter.

Park said he and the two other players should help South Korean baseball grow further and he'd like to see young players keep knocking on the big league doors.

"I think a lot of players will try to challenge themselves in the majors once they become eligible," Park said. "And I'll be fully supportive of those players. They all have their dreams. I just hope they'll just stick to whatever it is they've been doing here when they move to the U.S."