WASHINGTON, Jan. 9 (Yonhap) -- The United States on Tuesday welcomed inter-Korean talks that led to North Korea's agreement to participate in the Winter Olympics and discuss easing military tensions with the South.

But the U.S. also emphasized it will continue its maximum pressure campaign to ensure the North takes the path to abandoning its nuclear weapons.

"The United States welcomes the January 9 meeting between the Republic of Korea and North Korea aimed at ensuring a safe, secure, and successful Winter Olympics in Pyeongchang," Heather Nauert, spokeswoman for the State Department, said in a statement.

She added, "The United States remains in close consultations with ROK officials, who will ensure North Korean participation in the Winter Olympics does not violate the sanctions imposed by the U.N. Security Council over North Korea's unlawful nuclear and ballistic missile programs." 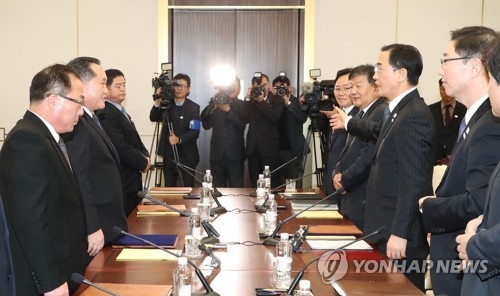 The two Koreas met at the border truce village of Panmunjom to mainly discuss the North's participation in the Winter Games slated for Feb. 9-25 in the South's alpine town of PyeongChang. The high-level dialogue -- the first since December 2015 -- was proposed by Seoul after North Korean leader Kim Jong-un expressed a willingness to engage in talks and send a team to the Olympics in his New Year's speech.

Widely hailed as a breakthrough, the meeting also produced an agreement to hold military talks on reducing tensions along the inter-Korean border. North Korea informed the South that it has restored a military communications channel to the west.

There is speculation that the North's high-level delegation to the Olympics could include Choe Ryong-hae, the regime's de facto No. 2 official, who is under South Korean unilateral sanctions for his apparent role in the country's nuclear and missile provocations.

Seoul's foreign ministry said the government may temporarily ease the sanctions if necessary to enable North Korean officials to attend the Games.

Tensions escalated to new levels last year as Pyongyang fired three intercontinental ballistic missiles capable of striking the U.S. mainland and tested its sixth nuclear bomb. The U.N. Security Council imposed a raft of new sanctions on the regime to stem the flow of fuel and revenue into the weapons programs.

The State Department spokeswoman noted that South Korean President Moon Jae-in and U.S. President Donald Trump agreed in a phone call last week to "continue the campaign of maximum pressure on North Korea toward the goal of complete and verifiable denuclearization of the Korean Peninsula."

In separate remarks sent to Yonhap, a spokesperson for the White House National Security Council said, "North Korean participation is an opportunity for the regime to see the value of ending its international isolation by denuclearizing."

White House press secretary Sarah Sanders later said the North's attendance will not affect U.S. participation in the Games. Some Americans, including Sen. Lindsey Graham (R-SC), have said the U.S. should sit out if the North goes to the Olympics.

"I think certainly the next steps would be a denuclearization of the Korean Peninsula, (which) is our No. 1 priority and certainly what we would like to see," Sanders told a regular news briefing.

She also said the U.S. plans to announce its delegation to the Olympics "in the coming days," amid reports Trump's daughter, Ivanka, could be included.

Analysts cautioned against lowering the guard.

"While this agreement is a positive step toward decreasing tensions on the peninsula, it is important to remember the task ahead, of convincing North Korea to cease its provocations and nuclear development, and continuing to apply pressure on the regime through sanctions," said Donald Manzullo, president of the Korea Economic Institute of America.

Jonathan Pollack, a nonresident senior fellow at the Brookings Institution, played down the results of the talks.

"It remains to be seen if the more civil atmosphere prior to the Olympics can address the much deeper divide over major substantive issues -- in particular, North Korea's nuclear and missile development (which Pyongyang insists is none of Seoul's business) and the almost certain North Korean demands in any future discussions to weaken or dismantle outright the workings of the U.S.-ROK alliance," he said in emailed remarks to Yonhap.

"The critical issue here is whether the ROK is prepared to say 'no' to the inevitable demands from the DPRK, despite the Moon administration's clear desire to improve inter-Korean relations," he added, using the acronym for North Korea's official name, the Democratic People's Republic of Korea.