SEOUL, Jan. 10 (Yonhap) -- A consumer activist group said Wednesday it will file for a compensation suit with a Seoul court this week against Apple Inc. and its local headquarters for a reward of 2.2 million won (US$2,056) per plaintiff.

The Citizens United for Consumer Sovereignty (CUCS) is expected to file the suit with the Seoul Central District Court on Thursday on behalf of 150 people who claim damages from Apple slowing down its older iPhones to solve their battery problems.

It will be the first local compensation suit over the case. Hannuri Law, a law firm, is preparing a separate lawsuit.

The law community cites a number of key points in the case, mainly whether the court sees Apple's action as intentional to bolster sales of the newer iPhones. South Korea does not apply punitive damages, but a court ruling saying so could sway the final outcome, legal watchers say.

Apple admitted on Dec. 20 that its operating software updates slowed down the iPhone 6, 6S and iPhone SE to prevent the smartphones from shutting down abruptly. On Dec. 28, the company denied that the measure, not disclosed to the iPhone users, was motivated to induce users to switch to newer models, an accusation from the customers worldwide.

CUCS said it will follow up with more lawsuits after Thursday's filing.

Hannuri Law is accepting applicants for its own lawsuit against Apple until Thursday, with 352,394 people having signed up as of Tuesday morning.

The firm said it expects to be able to file the suit in early February.

Another local law firm, Hwimyung, is also accepting applicants for a similar lawsuit. 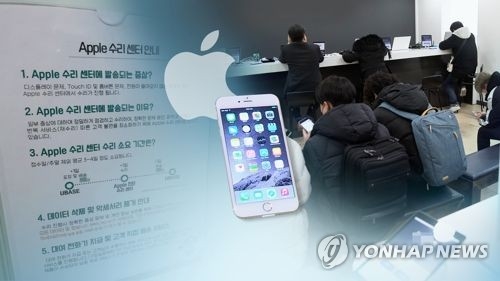