The MUH-1s, the Marine version of the KUH-1 Surion developed by Korea Aerospace Industries (KAI), represent the first major aircraft possessed by the 28,800-strong troops since they were integrated into the Navy in 1973.

The Marine Corps has since relied on the assets of the Navy, the Army and the Air Force to transport its service members and equipment.

The MUH-1 has been nicknamed Marineon, a combination of the words Marine and Surion.

They will be used for various missions, including the defense of strategic islands, rapid response and humanitarian operations, said the unit.

It has already trained 40 pilots and 40 maintenance staff members amid efforts to introduce attack choppers and launch a Marine Corps aviation team in 2021. 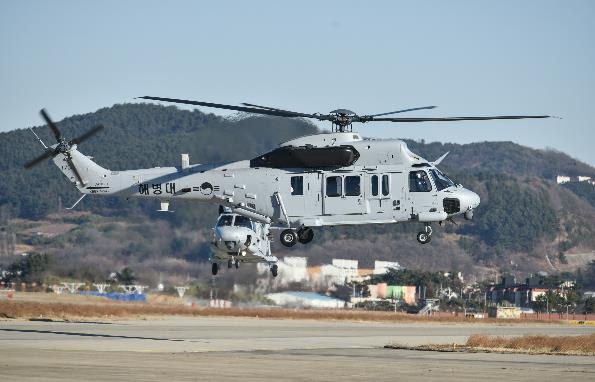 "We have gained a new pair of wings again after 45 years amid the people's trust and expectations," Marine Corps Commandant Lt. Gen. Jun Jin-goo said at the delivery ceremony held at the 1st Division in Pohang, attended by more than 100 other dignitaries.

He added it will help the Marine Corps beef up its operation capabilities, not only on the ground but also in the air.

The 19-meter-long, 3.5-meter-wide MUH-1 can carry up to nine troops, flying for more than three hours with a supplementary fuel tank installed.