South Korean boats caught a total of 12,082 tons of squid in coastal waters and the open sea last year, which was down 20 percent from a year earlier, the Korea Maritime Institute (KMI) said. Only 8 tons of squid were caught near land, tumbling 33 percent from 2016.

The institute attributed the drop in stock to Chinese trawlers' overfishing in North Korean waters before the squid head south.

Chinese fishing boats started operating in the North Korean part of the East Sea starting in 2004, with the number rising 35 percent from 2016 to 1,709 last year.

The KMI expected the stock to recover this year as North Korea is prohibited from selling its fishing rights to another country under U.N. sanctions adopted last year following Pyongyang's nuclear and missile tests.

"If Chinese boats are banned from entering North Korean waters, the squid catch is expected to recover this year," the KMI said. "The government should make diplomatic efforts to urge China to faithfully implement the UN resolutions and come up with measures to regulate illegal fishing." 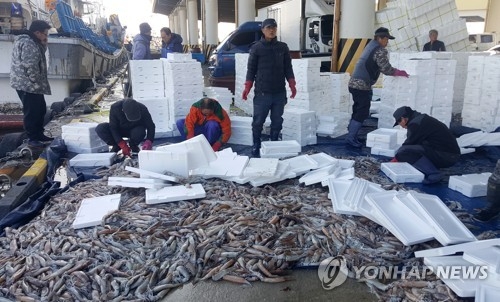