SEOUL, Jan. 10 (Yonhap) -- South Korea's unification minister on Wednesday dismissed concerns that Seoul's push for dialogue with North Korea may create a fissure in the united front pressing Pyongyang into giving up its nuclear weapons.

North Korea agreed Tuesday to send a delegation to the PyeongChang Winter Olympics, which will be held in the South, and to hold military talks with South Korea to discuss ways to ease border tensions. 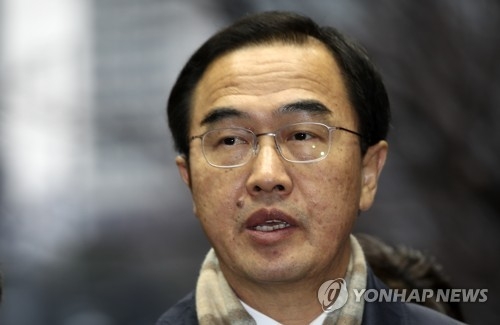 Minister Cho Myoung-gyon said that he does not think that inter-Korean dialogue will weaken the international community's efforts to enforce sanctions and pressure on the North over its nuke and missile programs.

"I don't think that talks with North Korea go against (the government's) two-track approach of seeking sanctions and dialogue," the minister told a group of reporters.

Cho, South Korea's chief delegate for Tuesday's talks, raised the need to resume dialogue on North Korea's denuclearization. But his North Korean counterpart is said to have made strong complaints about the issue.

"We've said what we want to say in terms of inter-Korean ties, along with the North's nuke issue," the minister said.