SEOUL, Jan. 10 (Yonhap) -- President Moon Jae-in on Wednesday urged Japan to accept historical truth and make a heartfelt apology to the victims of its wartime sexual slavery as part of efforts to resolve the longstanding feud over the issue between the two countries.

In a nationally televised press conference, Moon reaffirmed that a controversial 2015 deal with Japan aimed at resolving the issue once and for all was reached "in the wrong way," which excluded the opinions of the victims.

"Basically, the comfort women issue should be resolved based on the principle of truth and justice," Moon said. "I think the victims will forgive and this issue can be completely resolved when Japan accepts the truth, make a heartfelt apology to the victims, learn lessons and cooperate with the international community in preventing recurrence of such a thing."

"This should be resolved this way. I don't think that this is a matter that can be resolved in a give-and-take manner between governments with the victims excluded in the process," he added. 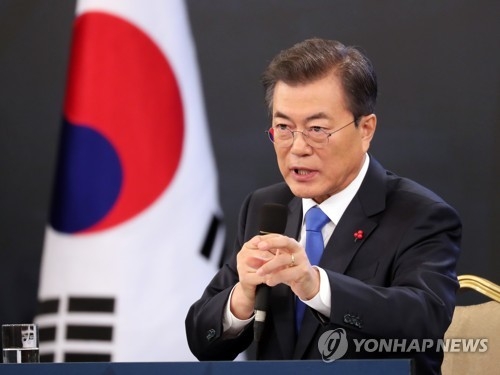 Under the deal reached on Dec. 28, 2015, the two countries agreed to "finally and irreversibly" resolve the comfort women issue. Tokyo apologized for its colonial-era atrocities and pledged 1 billion yen (US$8.9 million) to a foundation dedicated to supporting the victims.

The deal prompted strong criticism from victims and civic groups who claim that Japan's apology was not sincere enough and that the government did not consult with them in advance. Some, including victims, call for renegotiating or even scrapping the deal.

The Moon administration has reviewed the deal and recently concluded that the previous Park Geun-hye government failed to make sufficient efforts to reflect the views and opinions of victims and citizens. Moon also said that the deal is gravely flawed.

But the government announced on Tuesday it will not to seek a renegotiation. It, instead, vowed to set aside its own funds to help the victims heal their wounds and recover their dignity, not using Japan's contribution.

The government appears to face a dilemma as it has to minimize strain on bilateral ties with Japan, while at the same time making efforts to recover the honor and dignity of the victims. On Tuesday, Japan expressed its displeasure with the decisions, renewing its call for Seoul to faithfully implement what was agreed to under the deal.

"Most of all, we need measures to heal the wounds of our victims and console their hearts but it cannot be accepted that such efforts have been made with the money contributed to by Japan under the agreement, which they are unwilling to accept," Moon said. "We will make the healing efforts for them with our own money."

Moon said that he is not satisfied with the follow-up measures announced Tuesday but admitted that it was the results of taking into consideration of the country's relations with Japan as well.

"How could it be satisfactory," Moon said. "Still since it is a diplomatic matter where there is a counterpart and the deal was formally reached between governments, even if we are not fully satisfied with this, we should find a realistic and best-available method."

The president said how to handle the money offered by Japan will be decided in consultations with the Japanese government and other relevent parties.