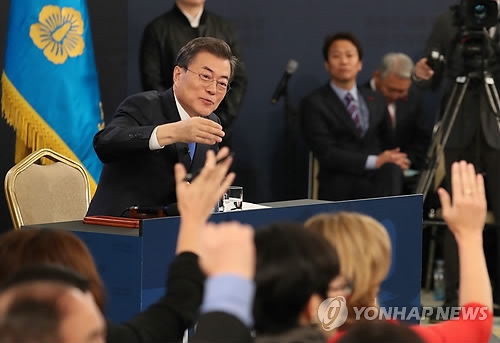 Taking questions from some 200 local and foreign journalists, the president also offered his views on ways to address a controversial 2015 deal with Japan to settle the long-running dispute over Korean women forced into sexual servitude for Japanese troops during World War II.

On Tuesday, South Korea's foreign minister reaffirmed the government's stance that the deal is defective but said the country will not seek renegotiations of the agreement.

Moon said the decision not seek renegotiation of the defective deal was the best decision available because no government agreement can truly resolve the historic issue.

"Basically, I believe the comfort women issue can only be resolved under the principle of truth and justice. The victims may be able to forgive when Japan acknowledges the truth and sincerely apologize to the victims, and when it works with the international community to prevent a recurrence of such tragedy, and that will be the complete resolution of the issue," he said. 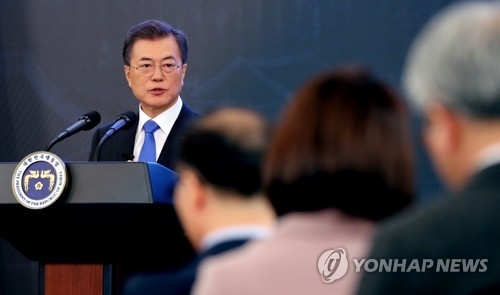 On the domestic front, the president said the government may have to spearhead the ongoing efforts to amend the Constitution should the National Assembly fail to do so before the end of March.

"Generally, I believe a constitutional revision must be proposed before the end of March if it were to be put to a vote concurrently with the local elections," he said when asked when the government will start taking the lead.

In his opening remarks marking the start of his second press conference since taking office in May, the president said a stand-alone national referendum on a constitutional amendment could cost an additional 120 billion won (US$112 million).

When asked to clarify recent suspicions over a possible dispute with the United Arab Emirates, the president noted the country has signed a number of defense agreements and memoranda of understanding (MOUs) with the Middle Eastern country under the country's three former administrations, but that none of those signed under his two immediate predecessors -- Lee Myung-bak and Park Geun-hye -- had been revealed.

Moon said he will not disclose the contents of the agreements signed under the two former administrations as agreed by them to the UAE government, but said he will seek to revise them should there be any flaws.

"Basically, I believe foreign relations too must be carried out transparently, but if the former government has agreed not to disclose the information, I believe we also need to respect such agreement. But should there be a flaw in the undisclosed agreements or MOUs, we will consult with the UAE to revise and improve such parts," he said when asked if there was any agreement with the UAE that might jeopardize the lives of South Korean people in any way.

Earlier, the country's former defense minister, Kim Tae-young, said he had signed an agreement on Seoul's automatic involvement in any armed conflict in the UAE while serving under former President Lee Myung-bak, also acknowledging the deal was signed without the required ratification by the South Korean parliament.