"Top Seed," which hit various online music services on the same day, is the first album to be released by the six-member group after a 16-month break and the band's first studio album in three years and eight months.

The album is packed full with 14 brand new tracks of varying genres, including ballad, dance and rock, and is led by lead track "Tell Me," a mid-tempo synth ballad with dynamic string arrangements. 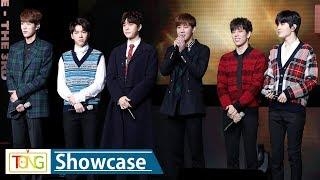 INFINITE holds showcase for 'Tell Me'

INFINITE holds showcase for 'Tell Me'