The new package consists of 22 coin types -- with values ranging from 1,000 won (US$0.94) to 30,000 won -- and specially produced 2,000-won bank notes, the PyeongChang Organizing Committee for the 2018 Olympic and Paralympic Winter Games (POCOG) said. It is priced at 11 million won and will go on preorder next Monday.

The set was produced combining two batches of commemorative PyeongChang coins and notes released since September of 2016. All items have emblems and engravings of Winter Olympics disciplines, such as ski jumping, short track skating and luge.

Purchasers can have special messages engraved on the coins. Also as a bonus, buyers will have their name engraved at a museum that will be built in Gangwon Province to commemorate South Korea's first Winter Olympics. 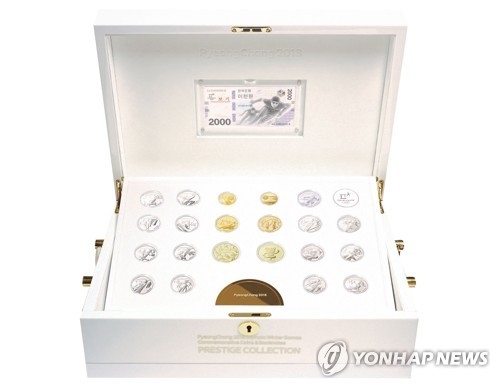 The committee said it plans to sell 888 copies of the set, adopting a theme of eight in its latest commemorative project. It is to highlight and celebrate the country's 1988 Seoul Summer Olympics as well as the 2018 Winter Games next month.

Korean singer Insooni, a promotional ambassador for the Winter Games, attended an unveiling event for set at the building of Poongsan Hwadong, a distributor and dealer of the coin set, in central Seoul. The singer was named the honorary "No. 1 customer."

"It will be a new experience knowing that names of customers will be put on display at the museum. I hope many will join me," the singer said.

POCOG President Lee Hee-beom said there is still a lot the committee has to do in preparing for the Games approximately a month away. "We will do our best for a successful hosting (of the Olympics)," Lee said. 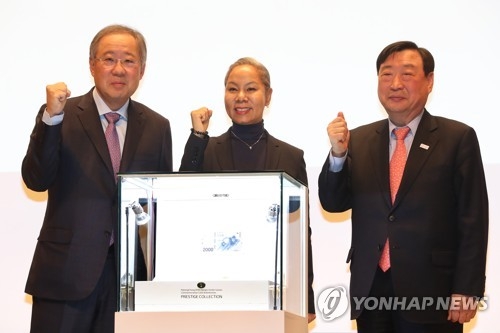