SEOUL, Jan. 10 (Yonhap) -- President Moon Jae-in on Wednesday ramped up pressure on the parliament to accelerate its hitherto unfruitful talks on constitutional revision, warning the government can take over the job to "minimally" alter the basic law.

In his New Year press conference, he also reiterated his push to hold a plebiscite on the revision simultaneously with the June local elections. To meet the schedule, parties should reach an agreement by late February and table a revision motion the following month, he said.

"Should it be difficult to expect the National Assembly to reach an agreement, I think the government itself may have to prepare for the revision a little earlier," he said during the unscripted meeting. 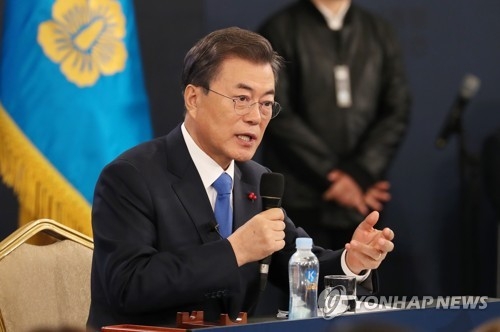 "If a determined parliament can have consultations with the government, we may be able to achieve the revision that will be broadest in scope. But should they fail to do so and the government makes its own proposal, its scope may need to be minimal to ensure citizens' support and parliamentary endorsement," he added.

Moon apparently seeks to inject fresh momentum in lackluster political talks on the revision of the charter that many agree is outdated as it fails to embrace social, political and economic changes that have transpired since its last revision in 1987.

Over the past year, a special parliamentary committee on the amendment has sought to build political consensus on the highly divisive issue. But little progress has been made amid partisan disputes on when and how to retool the Constitution.

Moon insinuated that political agreement on the amendment may not be that difficult given that political circles and experts have already made a raft of suggestions for it.

"As we have long discussed the revision, there have already been proposals ... whether strengthening fundamental rights, or regional autonomy, or reshaping the government structure," the president said.

"I believe we can strike an agreement on some of the proposals that we ourselves can agree to," he added.

Moon also repeated his preference for a change from the current single, five-year presidential term to a four-year presidency renewable upon re-election for another four years. He has espoused it on the grounds that an extended term could enable the government to maintain policy consistency and far-sighted visions.

Rival parties have sparred over when to hold a referendum on the revision.

The ruling Democratic Party hopes to hold the referendum at the same time as this year's local elections. But the main opposition Liberty Korea Party (LKP) argues that holding the polls at the same time would run the risk of politicizing the issue and that the revision needs sufficient deliberations.

The ruling party, which has only 121 seats in the 299-member legislature, needs the LKP's cooperation in the passage of any revision bill.

Tabling the proposal for a constitutional change requires backing from a majority of lawmakers. Passage of a bill needs support from two-thirds of the legislators. It then has to win majority support in a referendum.

Another sticking point in political discussions on the revision is how to revise the Constitution to address the concentration of powers in a single state leader that has been blamed for abuse of power, corruption and intense political polarization.

Various ideas have been floated, including introducing a semi-presidential system in which a popularly elected president shares some of his powers with a prime minister picked by the parliament.