SEOUL, Jan. 10 (Yonhap) -- The European Union welcomed the outcome of the recent talks between South and North Korea, labeling the talks as a positive step toward improved inter-Korean relations, a statement showed Wednesday.

The high-level talks on Tuesday "are an encouraging signal, representing a positive step towards the improvement of inter-Korean relations," the statement, issued by Federica Mogherini, the EU's high representative for foreign affairs and security policy, said.

"We welcome the joint announcement on the attendance of a Democratic People's Republic of Korea delegation at the PyeongChang Winter Olympics next month and on the holding of military talks between the two sides, which can be conducive to fostering and de-escalating tensions on the Korean Peninsula," the statement said. 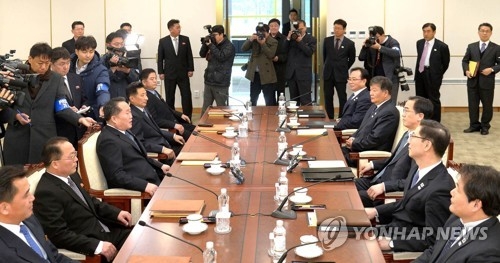 The EU also expressed hopes that the Tuesday talks and additional meetings the two sides will be "a building block for peace and stability on the Korean peninsula."

The EU expressed hope that the talks will, "prepare the ground for the DPRK to engage in a broader, credible and meaningful dialogue, aimed at pursuing the complete, verifiable and irreversible denuclearization of the peninsula." "The EU will continue to work towards this goal."

Tuesday's high-level talks marked the first official dialogue between the two Koreas in more than two years, and opened up the door for future discussion on inter-Korean relations and possibly North Korea's nuclear issues.