He delivered the message to U.S. Army Secretary Mark T. Esper in their Seoul meeting.

It was their first meeting since the secretary took office last November.

They discussed the issue of successfully hosting the PyeongChang Winter Olympics, cooperating on North Korea and reforming the armies of the two countries, the Ministry of National Defense said. 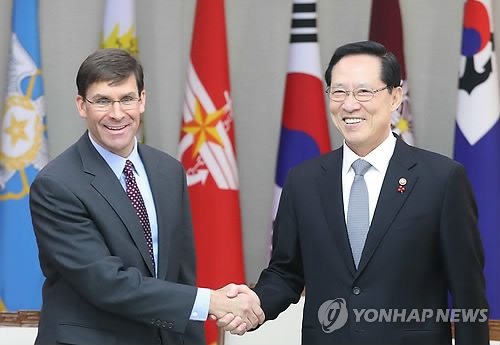 Song told Esper that the alliance is stronger than ever and the two sides are in close coordination for the denuclearization of the peninsula and peace and prosperity in Northeast Asia, it added.

He stressed that Seoul's efforts to reduce military tensions will contribute to achieving the shared goal.

The two Koreas resumed high-level talks earlier this week, and they are preparing for a meeting of military officials.

Some raise concerns that the alliance may be affected by Pyongyang's campaign to reach out to Seoul under its traditional slogan of handling Korea affairs "without outside forces," which apparently is a reference to Washington.

The U.S. official also reaffirmed the "ironclad" alliance and emphasized the need to apply continued pressure and sanctions on Pyongyang in cooperation with the international community to make it seek "sincere" denuclearization talks, according to the ministry.