Lee made the remark during a new year meeting with representatives of the SME industry, calling for SMEs to play a greater role in lifting South Korea's economy in the era of the Fourth Industrial Revolution centered on new innovative technologies.

"The government will expand assistance to SMEs. In particular, we will provide active support for attempts to bring about new industries and new technologies. The government will create an 'innovation venture fund' with a goal of raising 10 trillion won (US$9.34 billion) to help with risk-taking startups," Lee said.

Lee also pledged other support measures, such as providing the market with an 860 billion won investment fund the government created to help with venture startups and taking steps to make it easier for SMEs to take out loans.

"We will boldly unload regulations from new industries and new technologies," Lee said. "We will soon make a 'regulatory sandbox' visible so that new industries can take off without regulation. We will also flesh out the negative regulation system that calls for allowing everything unless specified otherwise."

Lee vowed to ensure that the business environment is fair for SMEs and big businesses and to make sure that conglomerates known as chaebol won't prey on smaller firms.

South Korea has long been trying to level the playing field for smaller firms in a country that has been dominated by chaebol for decades.

Lee acknowledged that raising the minimum wage increased the burden on businesses but asked for their understanding, saying that the government can no longer do nothing about low-income workers and the worsening income gap.

"Looking squarely at the realities of both labor and management, the government will do its best and implement various policy means to ensure that labor-related policies will make soft landings," he said.

Park Sung-taek, chairman of the Korea Federation of Small and Medium Business, echoed Lee's comments, saying that he will closely coordinate with the government and the parliament to come up with countermeasures over the hike in the minimum wage and the reduction of working hours.

The minimum wage rose by 16 percent to 7,530 won (US$7) for 2018, the biggest jump in about two decades. The hike has sparked backlash from small and medium-sized firms and mom-and-pop stores that can ill afford the extra outlay.

Also Wednesday, SMEs and Startups Minister Hong Jong-haak said the government will provide assistance to ensure that small and medium-sized companies can play a leading role in innovative growth. He did not elaborate. 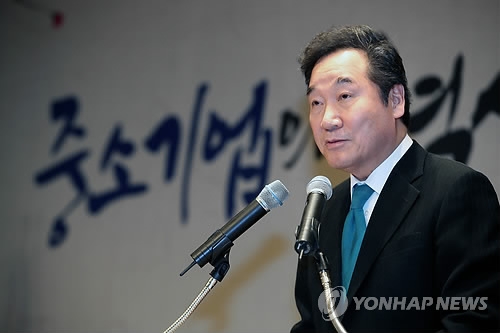