SEOUL, Jan. 10 (Yonhap) -- Major business groups on Wednesday agreed on the purpose of President Moon Jae-in's labor-friendly policies and stressed concerted efforts between the government and businesses to achieve the goal.

Beginning this year, the minimum hourly wage was raised to 7,530 won (US$7) from last year's 6,470 won as part of efforts to increase household income and boost domestic demand. 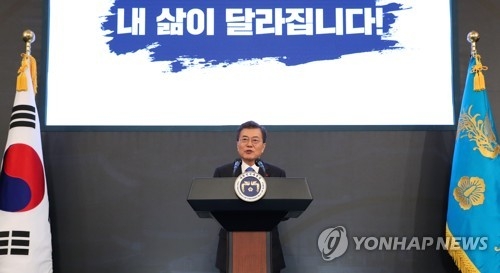 Critics have raised concerns that steep hikes in the minimum wage could be a burden to businesses and could adversely affect low-income workers as their employers could fire them.

"The government's focus on job creation and innovative growth is the right direction considering the high youth unemployment problem and the fourth industrial revolution," Bae Sang-geun, a senior FKI official, said. "It is important to create a business-friendly environment for companies that leads to more hiring."

The Korea Chamber of Commerce & Industry (KCCI) said the labor-focused policy is an inevitable trend in the global economy.

"More companies are aware of corporate social responsibility," a KCCI official said. "The key point is that the government and business circles should collaborate to create such an environment."

Some industry officials expressed concerns over a steep rise in labor expenses amid lingering economic uncertainties at home and abroad.

"We agree on the purpose of the minimum wage hike and shorter working hours, but a sudden change in policy could burden companies and hurt investment," a senior official from a major business group, said, declining to be identified.