SEOUL, Jan. 10 (Yonhap) -- The commanding general of U.S. Forces Korea (USFK) on Wednesday remained cautious about North Korea's motivation behind its decision to hold talks with the South as part of its recent peace offensive.

"The fact that (the inter-Korean talks) happened, I think, is notable, and that such a step has not been chosen before by North Korea," the USFK commander Gen. Vincent K. Brooks said during a luncheon meeting organized by the American Chamber of Commerce in Korea (AMCHAM) in Seoul.

Yet, the top U.S. military official in South Korea, who leads the 28,500-strong USFK, remained circumspect about interpreting North Korea's change in stance.

"What is the motivation? We don't know," he said. "We will have to see that over time."

The remarks were made a day after the two Koreas held high-level talks on the North's participation in the upcoming PyeongChang Winter Olympics in their first formal dialogue in two years.

"South Korea put this offer out there months ago, so the fact that something changed should get our attention," he said.

"We've seen occasions where North Korea instead of coming to a meeting with a productive sense, they come in with a disruptive sense where it's more theatrical than it is productive," he said. "In this case, there appears to have been an earnest meeting."

During Tuesday's meeting, North Korea accepted Seoul's proposal to hold military talks to reduce tensions and send a delegation to next month's Winter Olympics in the South.

The agreement marked a major breakthrough following years of frosty ties between the two countries and in last year's heightened tensions over the North's nuclear and missile provocations. 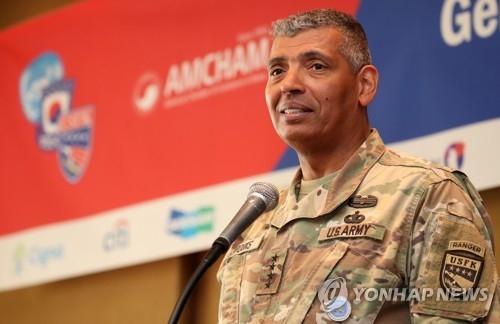