On Tuesday, South and North Korea agreed, in their first high-level talks since 2015, that the North would send high-ranking officials, athletes, cheering and performing arts squads, taekwondo demonstration teams and journalists, to next month's Winter Games.

"A massive delegation totaling between 400-500 people is expected to come," Lee said during a meeting with companies sponsoring the PyeongChang Olympics, adding that the two Koreas will work out details of the delegation's visit.

Lee said the PyeongChang Games should leave an important legacy, just as the 1988 Summer Olympics in Seoul did.

"It will be difficult to say that the festival of mankind taking place in PyeongChang, just 100 kilometers from the Demilitarized Zone, will make no contribution to the human history," Lee said. "It is bound to make contributions of a sort and leave traces."

Lee said he hopes the PyeongChang Games will help reduce security risks on the Korean Peninsula.

"Just as the '88 Olympics contributed to dismantling the Cold War, we earnestly hope that the PyeongChang Winter Olympics will improve the current state of the Korean Peninsula, which is in a grave security situation and ... contribute to world peace by reducing security risks," he said. 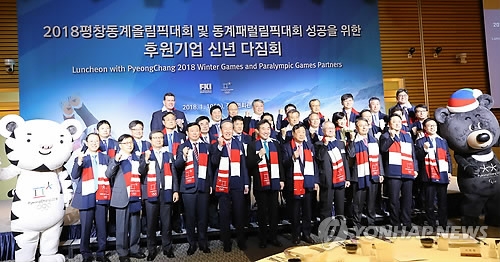