JINCHEON, South Korea, Jan. 10 (Yonhap) -- South Korean men's short trackers failed to grab any medals at the 2014 Sochi Winter Olympics, but the national team said Wednesday it is still aiming for "the highest" goal for the first Winter Olympics to be hosted by their country starting next month.

Seo Yi-ra, one of most highly anticipated male skaters, said he feels excited about his first Olympics. The games are scheduled for Feb. 9-25, with PyeongChang's adjacent sub-host cities of Gangneung and Jeongseon hosting ice and skiing events.

"It did not hit me until recently (that the Olympics are coming up)," Seo told reporters at Jincheon National Training Center in Jincheon, some 90 kilometers south of Seoul. "I am putting my best efforts on training more than ever." 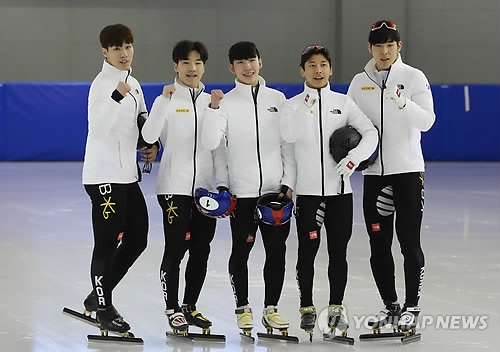 Seo said he is aiming for the "highest goal" at the 2018 PyeongChang Winter Olympics of winning medals in all his events. "I plan not to be burdened by the goal and seek to enjoy the games and give a nice performance," Seo added.

Kim Do-kyoum has similar plans, saying he is preparing for the games with excitement in his heart.

"We are at the final stage of training for strength," Kim said. "Currently, we are focusing on improving speed and muscular endurance so that we can compete for a long period while maintaining speed."

Lim Hyo-jun and Hwang Dae-heon, who recently came in the spotlight as new faces of South Korean men's short track, also have high hopes and have concentrated on their training at the national center for a successful debut at the Olympics.

Hwang, who has been suffering from a left arm injury, said his condition is improving.

"I will skate with an ambition to show what I have prepared to the fullest," said Hwang, who suffered an injury during a fall at the third World Cup in Shanghai in November. Sources said his condition has worsened as he has continued with preparations for the upcoming Games.

"There is some pressure. But as it is also the stage I have dreamed of, I believe there will be good results if I enjoy the games without making mistakes," Lim said.

Kwak Yoon-gy, the most senior member of the team, said as the public's expectation for the team is relatively low compared to the female team, he feels more comfortable.

"The team members took great care of me when I fell behind in terms of strength or techniques. I am currently with the best team ever," Kwak said, claiming that the team may open a new chapter for South Korea's male short track and melt the public's icy doubts. 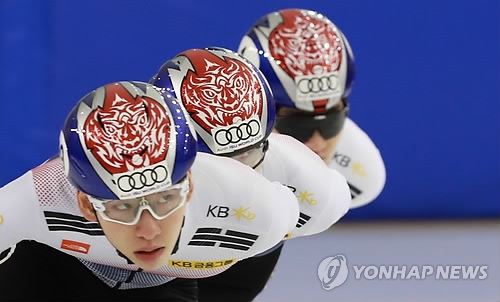