During a high-level meeting on Tuesday, the North offered to send a delegation to the quadrennial games hosted by the South. The two countries also agreed to hold what will be their first military talks in more than three years. A date and venue have yet to be decided.

It remains uncertain whether the two sides will produce a meaningful agreement on reducing tensions heightened by the North's provocations, amid years-long lack of bilateral dialogue.

"For now, the focus of the (military) talks this time is on the successful and peaceful hosting of the Olympics," a senior Ministry of National Defense official told reporters on background. "We will handle (agenda items) on a step-by-step basis starting from the easiest issue."

His remarks suggest that the South will concentrate on discussing measures needed for the temporary cross-border travel of the North's delegation, which is expected to be comprised of hundreds of athletes, cheering squad members, taekwondo performers and reporters. 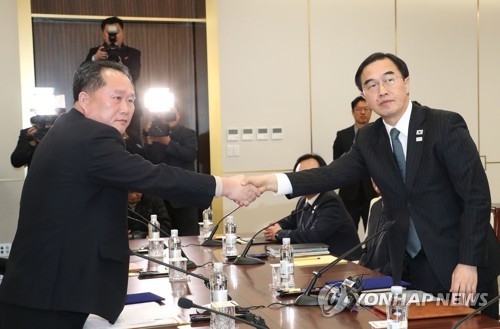 It would involve some inter-Korean military cooperation and other steps associated with lowering tensions along the heavily fortified border. The South's eastern town of PyeongChang is located some 80 kilometers south of the Demilitarized Zone (DMZ) dividing the peninsula.

Apparently, however, Seoul will lower expectations for easing border tensions in the upcoming military talks in a bid to prevent the sensitive issue from affecting Olympics-related agenda items.

"There's no contact between the South and North Korean authorities yet on arranging the agreed-upon dialogue," the official said. "Interagency consultations are under way, as it's not a matter of the military's independent preparations or actions."

Relevant authorities include the National Security Council of the presidential office Cheong Wa Dae, he said.

No decision has been made on whether the South will propose a schedule or wait for the North's message.

The liberal Moon Jae-in administration already offered military dialogue with the North last July to talk about halting "all acts of hostility" near the Military Demarcation Line (MDL), including loudspeaker propaganda campaigns, and staving off unintended clashes there.

The ministry earlier made it clear that the proposal remains valid.

The level of chief delegates in the new round of negotiations is up to consultations amid the view that they are likely to start with working-level negotiations led by officials with the rank of colonel or lieutenant colonel.

"As North Korea's delegation will likely visit South Korea through the MDL, the subject of primary discussions is (border) passage procedures and safety guarantee measures," another government official said.

No big troubles are expected in striking an agreement on the topic, given the North's desire to join the Olympic Games that will open on Feb. 9 for a two-week run, he added.

There's a possibility that the two Koreas will push for general-grade dialogue after the PyeongChang event to discuss full-scale tension-reducing measures like the removal of their propaganda loudspeakers installed along the DMZ. 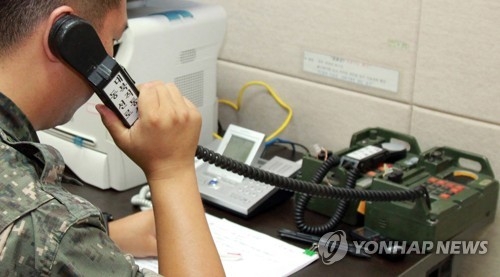 A positive sign is the two Koreas have reconnected their military hotline, which Pyongyang severed in early 2016 in protest against Seoul's decision to shut down the joint industrial complex in Kaesong.

The two sides began "normal" operation of the communication channel without a hitch following a brief test run Wednesday morning, according to the ministry.

The South believes it is crucial to keep the military hotline open to help avoid accidental armed clashes as the Yellow Sea border is disputed. The waters around the Northern Limit Line (NLL), the de facto sea border, have been a flash point for several deadly naval skirmishes.

The two Koreas had their last military talks in October 2014 at the truce village of Panmunjom, with South Korea represented by then-Deputy Defense Minister for National Defense Policy Ryu Je-seung. His northern counterpart was Kim Yong-chol, a four-star general who commands the Reconnaissance General Bureau.