SEOUL, Jan. 11 (Yonhap) -- South Korea's edge in Winter Olympics is undoubtedly in speed skating and short track. But the country has no clear advantage in biathlon, which combines cross-country skiing and rifle shooting -- one of the most uncommon winter sports in South Korea.

Hence for Mun Ji-hee, a South Korean female biathlete who will compete in her third Winter Olympics next month in Pyeongchang, keeping expectations at a manageable level is important. The 30-year-old is keeping her hopes realistic, aiming to making it to the top 30.

But to many, even that would be seen as a miracle, considering the meager support for and public interest in biathlon.

"I don't have a fixed goal for my performance in PyeongChang" Mun said in a telephone interview with Yonhap News Agency, adding that she does "want to enter the top 30 to make it into the pursuit competition." 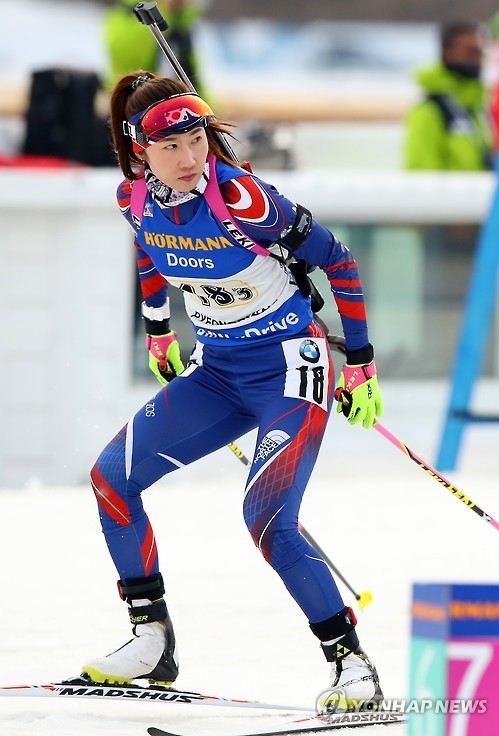 While Mun competed in both the 2010 and 2014 Olympics, she never made it beyond the sprint stage, finishing 63rd in Vancouver and 74th in Sochi. In the Olympics, players have to enter the top 60 to compete in the pursuit competition.

This time, however, Mun is hoping to utilize her home advantage.

"I think we're at an advantage. We've lived here for a long time, while international athletes have to overcome jet lag," said Mun. The best performance of her career to date was finishing 30th at the International Biathlon Union (IBU) World Cup in Oberhof, Germany, last week.

Mun admitted that she often stumbled while shooting. "I know I have to practice my shooting before the Olympics begins," said Mun.

The biathlete also noted that she received a lot of help from the naturalized athletes. "I acquire a lot of visual references from the naturalized players. Watching the preparation and seeing how they compete is also a great lesson," said Mun. Frolina and Avvakumova finished 26th and 45th, respectively, at the IBU World Cup in PyeongChang last year.

Mun's entry into biathlon couldn't have been more casual -- she took on the sport after watching a friend do it while in middle school. Mun said she "never regrets starting" biathlon back then. "The Olympics still looms large for me. I'll think about what I'll do post-PyeongChang after the Games," Mun said. 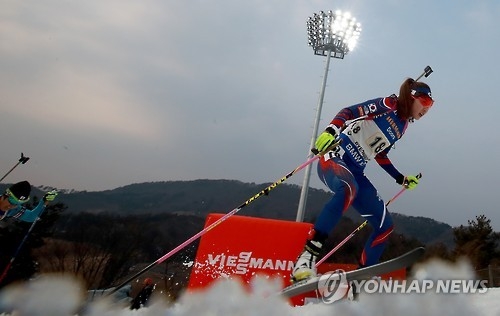