The two Koreas met for the first time in more than two years Tuesday and agreed to hold military talks to ease tensions along their border. North Korea also agreed to send a delegation to the PyeongChang Winter Olympics in the South next month.

Trump said he had just spoken on the phone with South Korean President Moon Jae-in to discuss the meeting.

"He's very thankful for what we've done," he said at a Cabinet meeting. "They're having talks with North Korea. We'll see how that happens. He felt that the original -- that the initial talk was extremely good. Had a lot of good comment." 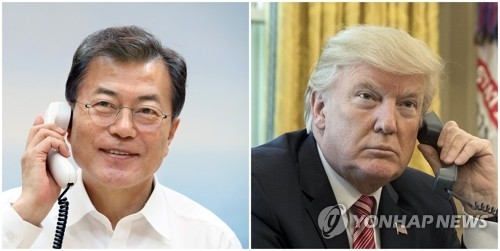 According to a White House release, Trump told Moon he is open to holding talks between the U.S. and North Korea "at the appropriate time, under the right circumstances." The two countries have seen an escalation of tensions over Pyongyang's nuclear and ballistic missile programs, which the regime says are targeted at Washington.

Trump has taken credit for enabling the talks. He tweeted last week, "Does anybody really believe that talks and dialogue would be going on between North and South Korea right now if I wasn't firm, strong and willing to commit our total 'might' against the North."

Trump has warned the North of "fire and fury" and total destruction should it continue to threaten the U.S.

"It was so reported today that we were the ones -- without our attitude, that would have never happened," he said. "Who knows where it leads. Hopefully, it will lead to success for the world -- not just for our country, but for the world. And we'll be seeing over the next number of weeks and months what happens."

Trump hopes inter-Korean talks lead to 'success for the world'

Trump hopes inter-Korean talks lead to 'success for the world'