SEOUL, Jan. 11 (Yonhap) -- Prosecutors raided the headquarters of a local auto parts maker Thursday as part of an investigation into allegations that the company has kept a secret fund for former President Lee Myung-bak.

Investigators from the Seoul Central District Prosecutors' Office searched the premises of DAS headquarters in Gyeongju, 371 kilometers southeast of Seoul, and confiscated evidence, according to the prosecution.

Prosecutors suspect that the company has kept a 12 billion-won (US$11.2 million) slush fund under dozens of borrowed names, embezzled funds and evaded taxes. DAS is controlled by Lee's elder brother, but rumors have persisted that the former president is the real owner of the company.

Lee, who served as president from 2008-2013, has been investigated over the allegations but was cleared of the charges. However, the prosecution reopened the case late last year after a formal complaint was filed by a civic group and a lawyers' association against Lee and the independent counsel that was in charge of the case in 2008. They accused Lee of embezzlement and concealment of criminal proceeds, among other charges. The complaint also accused then-Special Counsel Chung Ho-young of failing to do his job.

The complaint came on the heels of rekindled suspicions surrounding DAS, following media reports that Lee's son was named the head of several DAS factories in China, even though he has no share in the company.

A separate investigation is under way over the company's recouping of a 14 billion-won investment from an investment advisory firm set up by Lee's former business partner. A group of investors who never recovered their losses filed a complaint accusing Lee of pulling the strings for DAS to take back the investment ahead of them. 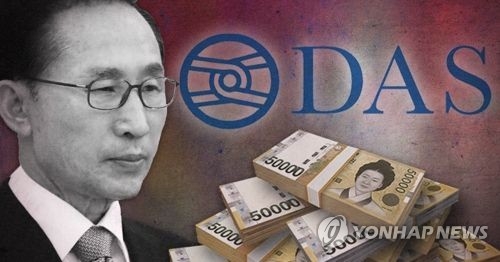