SEOUL, Jan. 11 (Yonhap) -- The torch for the 2018 PyeongChang Winter Games will tour Seoul later this week as one of its stops on its way to the venue of the country's first Winter Olympics, the city government said Thursday.

It will mark the first time in nearly 30 years for the capital city to hold a torch relay event since the 1988 Summer Olympics held in Seoul. The 2018 Winter Games will kick off in PyeongChang, which lies 180 kilometers east of Seoul in Gangwon Province, on Feb. 9.

The Seoul metropolitan government said the torch relay will be held in the city from Saturday to Tuesday in a course that spans 103 kilometers, with some 600 torchbearers joining the race.

The Olympic torch carries the flame that was lit at the Temple of Hera in Greece in October, which arrived in South Korea in November. It then toured major cities across the country, including Jeju, Busan, Gwanju, Daejeon and Incheon, before arriving Seoul.

Major bearers in Seoul will include South Korean football legend Cha Bum-kun and actor Park Bo-gum, along with various citizens.

During Sunday's relay, the torch will reach Seoul Olympic Stadium, the venue for the opening and closing ceremonies at the 1988 Seoul Summer Games. Some past and current Olympians will have the honor of carrying the Olympic flame that day, according to the Korean Sport & Olympic Committee (KSOC).

The star-studded list will include former speed skater Kim Yoon-man, the 1992 Olympic silver medalist in the men's 500 meters, who was the first South Korean to win a Winter Olympic medal. He will be joined by 2002 Olympic short track champion Choi Min-kyung and Park Jong-ah, current captain of the women's ice hockey team.

Lee Kee-heung, president of the KSOC, and Kim Ji-yong, head of the South Korean delegation to PyeongChang 2018, will also carry the torch.

Seoul Mayor Park Won-soon said the city will focus efforts on promoting the upcoming Winter Games in the country.

After leaving Seoul, the torch will travel the northern parts of Gyeonggi Province and head toward the host city of the Winter Games. The combined distance traveled by the torch will reach 2,018 kilometers, carried by around 7,500 torchbearers. The Olympics will run from Feb. 9 to 25. 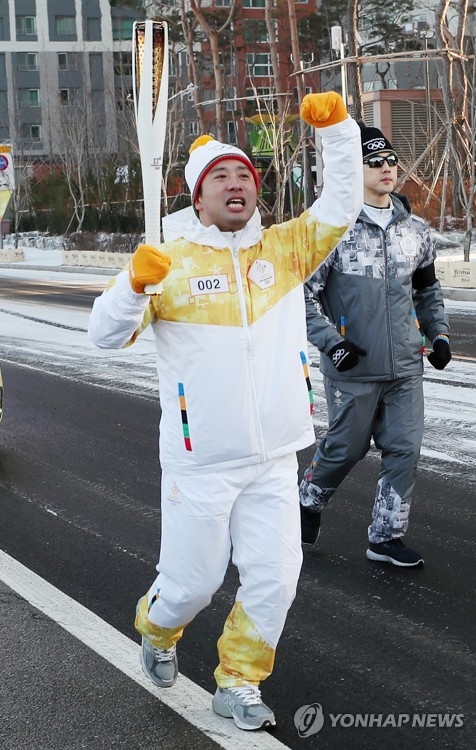