During his press conference for the new year Wednesday, Moon said he has no plans to ease Seoul's unilateral sanctions on Pyongyang and linked the issue of improving cross-border ties to that of resolving the North's nuclear issue.

His remarks came amid growing concerns among conservatives that he has hurriedly pushed for inter-Korean dialogue and rapprochement in a way that could hinder the momentum of international sanctions against the provocative regime.

"My assessment is that (Moon's policy) is considerably more balanced than it was in the past," Yoo Seong-min, the party's leader, said during a meeting with senior party officials. "We hope that he will consistently keep his word." 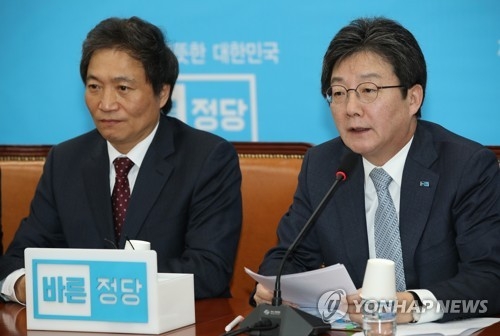 Yoo also called on the government to engage in dialogue with Pyongyang based on the belief that cross-border talks would be key to resolving the long-running nuclear stalemate with the North.

On Tuesday, the two Koreas held their first high-level talks in two years. During the highly charged talks, Pyongyang agreed to hold military talks with Seoul on reducing border tensions and send a delegation to next month's Winter Olympics in the South.

Conservatives remain skeptical about inter-Korean talks, believing that the impoverished North will only use the dialogue to ease global sanctions, wring economic concessions from the South, sow division among South Koreans, and drive a wedge between Seoul and Washington.

Apparently aware of such concerns, Moon clarified during the press conference that he would stick to a two-track approach of sanctions and dialogue, and rejected suggestions that Seoul is seeking "talks for the sake of talks."

Along with the main opposition Liberty Korea Party, the Bareun Party has been a vociferous critic of Moon's North Korea policy. It has consistently pressed the government to take a tougher stance on the North.