SEOUL, Jan. 11 (Yonhap) -- BTS walked the red carpet at the 32nd Golden Disc Awards, on the first day of the two-day awards ceremony on Jan. 10.

This year's event marked BTS' fourth consecutive year of winning that award. In 2014, the boy band attended the annual event for the first time and won the best rookie award.

BTS is also nominated for the Album of the Year, to be awarded on day two of the show. Day two is set to open at 5 p.m. on Jan. 11 at KINTEX convention center in Goyang, just northwest of Seoul. 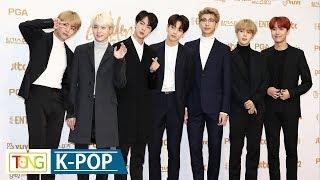