SEOUL, Jan. 11 (Yonhap) -- With North Korea set to join next month's Winter Olympics in the South, Seoul appears to be struggling with how to accommodate a large-scale delegation of North Korean officials and athletes without violating multi-layered sanctions against Pyongyang.

Some say that the government should consider easing sanctions temporarily as a way to facilitate a thaw in inter-Korean relations through the sporting event. There are still calls to not go so far as to undermine the international sanctions regime that will be critical in applying pressure on the North to give up its nuclear and missile programs.

On Tuesday, senior officials from South Korea and North Korea met for the first time in more than two years at the truce village of Panmunjom to discuss Pyongyang's participation in the Feb. 9-25 PyeongChang Winter Olympic Games.

The North offered to send high-ranking officials, cheerleaders, performing artists, taekwondo demonstration teams and journalists in addition to athletes, and the South promised to provide them with necessary conveniences. They will hold working-level talks to work out details. 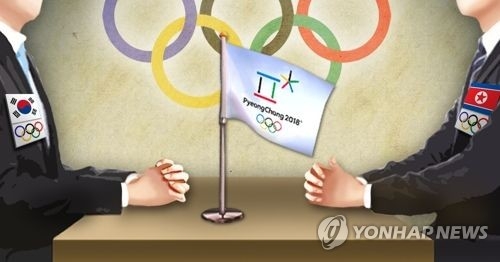 At issue is how to transport and accommodate what appears to be a large-scale North Korean delegation during the quadrennial event without going against sanctions that block exchanges with the reclusive regime.

Transporting the delegation by ship, for example, would violate unilateral sanctions adopted by South Korea that ban any ship that visited a port in the North from entering South Korea for one year.

It would also be a violation to bring in athletes and officials by air given that the North's Air Koryo airline is on the blacklist of U.S.-imposed sanctions.

Another sticking point is the North's inclusion in its delegation of officials placed on blacklists by the U.N. Security Council or South Korea's unilateral sanctions.

A prime example is Choe Ryong-hae, the regime's de facto No. 2 official, as he is under South Korean unilateral sanctions for his apparent role in the country's nuclear and missile provocations. Though South Korea's sanctions do not dictate any travel ban, his inclusion could be considered out of line with the global sanctions regime.

The government showed flexibility on the matter at first.

On Tuesday, when the inter-Korean talks were still under way, the foreign ministry in charge of applying the country's own sanctions on the North said that it could consider temporarily lifting some sanctions to make it easy for the North Korean delegation to visit and stay in South Korea.

President Moon Jae-in, however, made clear in his new year press conference the following day that he has no plans to ease sanctions on the communist state against the will of the international community.

"Now the dialogue with North Korea has begun, but because the North Korean nuclear issue has not been resolved, South Korea will continue to keep pace with pressure and sanctions by the international community. We have no plans for now to ease our unilateral sanctions against North Korea, which are in place in addition to international sanctions," he said.

He made the remarks after Washington's assertion that sanctions will remain in place on the North's nuclear and missile programs despite the ongoing preparations for its participation in the upcoming Olympics.

"The United States welcomes the January 9 meeting between the Republic of Korea and North Korea aimed at ensuring a safe, secure and successful Winter Olympics in PyeongChang," Heather Nauert, spokeswoman for the State Department, said in a statement.

"The United States remains in close consultations with ROK (South Korean) officials, who will ensure North Korean participation in the Winter Olympics does not violate the sanctions imposed by the U.N. Security Council over North Korea's unlawful nuclear and ballistic missile programs," she added.

A government official told Yonhap News Agency that Seoul remains firm that it will not seek anything related to the North's participation in the Olympics that could undermine the "basic spirit" of the existing sanctions but admitted that it could be a challenge if the North proposes something that goes against them.

"What if the North proposes a person who is on the blacklist in its delegation, and what if it proposes traveling by ship or air? It could put us in a quite difficult spot given that we need to make the PyeongChang Olympics a success anyhow," he said.

"Once details are finalized, we should do whatever it takes to make it happen ... but I hope that the two Korea will work out details about who will come and by what methods without violating existing sanctions," he added.

During a regular press briefing Thursday, foreign ministry spokesman Noh Kyu-duk told reporters that the government's basic stance is that it will do its utmost to avoid controversy over North Korea's participation in the games possibly violating sanctions.

Observers underlined the need to strike a balance between inter-Korean talks on the Olympics and cooperation with the international community on the sanctions regime.

They also warned that the government should not risk losing long-held global coordination that could be critical when things turn sour again after the sporting event.

"Easing sanctions of our own could cause trouble down the road in the pursuit of coordination with the U.S. All the bucks could end up with us," Park Jeong-jin, vice director of the Institute for Far Eastern Studies, said. "The government is required to make efforts to balance between inter-Korean relations and relations with the international community on this matter."