SEOUL, Jan. 11 (Yonhap) -- The lone South Korean member of the International Olympic Committee (IOC) said Thursday he will travel to Switzerland next week to attend a meeting on North Korea's participation in the Winter Olympics south of the border.

Ryu Seung-min, former Olympic table tennis champion, told Yonhap News Agency that he's scheduled to fly to the IOC headquarters in Lausanne, Switzerland, next Monday. The IOC said earlier Thursday that its president, Thomas Bach, will convene a four-party meeting on Jan. 20 in Lausanne with representatives from the 2018 PyeongChang Olympics organizing committee and the national Olympic committees of both South and North Korea.

Bach organized the meeting after North Korea offered on Tuesday to send its athletes to PyeongChang 2018, the first Winter Olympics to be held in South Korea, scheduled for Feb. 9 to 25. 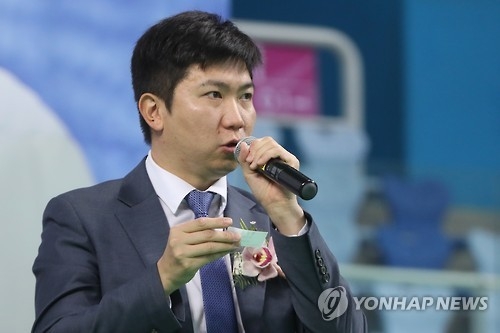 The IOC also said all parties will be led by their respective presidents, and the meeting will also involve high-ranking government officials and the IOC members from both countries -- Ryu from the South and Chang Ung from the North.

"I've been asked by IOC President Thomas Bach to attend the meeting on Jan. 20," Ryu said. "With the IOC and both Koreas involved, I think it will be a good meeting."

Chang already met with Bach in Lausanne on Wednesday (local time) and told a Yonhap News correspondent there that he will not attend the Jan. 20 talks.

Ryu said he has maintained "a good rapport" with Chang as they have frequently crossed paths at previous IOC meetings.

"After the meeting in Lausanne, I'll find out what specific roles I'll have to play regarding to North Korea's participation," Ryu added.

Ryu said North Korea's presence will be "the final piece of the puzzle" for an Olympic Games for peace, an ideal pursued both by the IOC and PyeongChang.

"Along with our government, PyeongChang's organizing committee and the IOC, I also welcome North Korea's participation," he said.

Ryu also said he'd like to see the Koreas march in together at the opening ceremony, which hasn't been done at an Olympic Games since the 2006 Torino Winter Olympics.

South Korea proposed the joint march during Tuesday's talks but North Korea didn't immediately respond to it. Seoul officials said the two sides are close to an agreement on that front. The Koreas will likely hold working-level talks before the IOC meeting to hammer out some details.

According to the IOC, the four-party meeting will "take a series of essential decisions." That includes the number and names of athletes and officials from the North Korean Olympic Committee, since deadlines for registration have passed. The IOC said it will also have to decide on the format of North Korea's participation, including questions related to flag, anthem, ceremonies and uniform.