SEOUL, Jan. 11 (Yonhap) -- Artist Kwak Duck-jun is best known for his satirical photography series "President and Kwak," where he mixed the bottom half of his own face with the upper half of famous U.S. presidents' faces that adorn the cover of the U.S. magazine Time.

But his painting series made from 1964-1969 is seen as the epitome of his artistic work, painfully created based on a near-death experience due to the illness and identity confusion that have dogged him for his entire life. 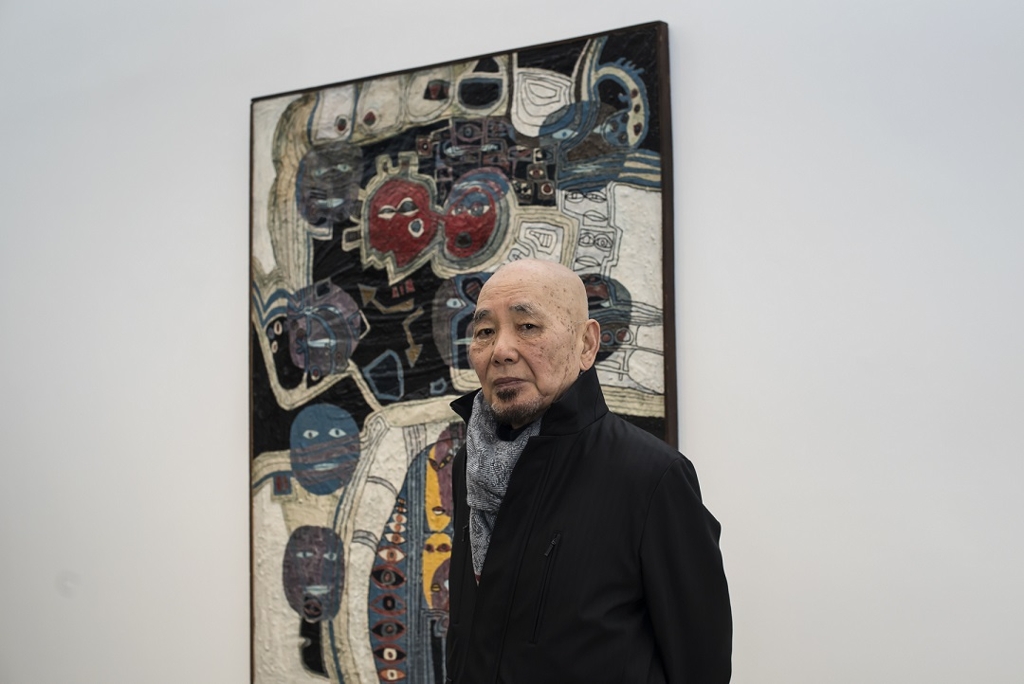 The 80-year-old still vividly remembers the day when he was harshly scolded by a Japanese father whose son burst into tears while playing with Kwak and a bunch of kids.

While he didn't do anything to the boy, "The father suddenly tore out of the house, shouting at me, 'You, josenjin!'" he recalled during a recent interview with Yonhap News Agency at Seoul's Gallery Hyundai, which currently hosts his solo exhibition "A Piercing Gaze." Josenjin was a derogatory term for Koreans used by Japanese when Korea was a colony of Japan.

Born in Kyoto, Japan, in 1937, to Korean parents, Kwak was Japanese on record until the Treaty of San Francisco took effect in 1952, when he, along with other people from Japan's former colonies, was deprived of his Japanese nationality.

It was a great shock that upended the world as he had known it. Barely speaking Korean, having lived his entire life in Japan and never visited Korea, he suddenly became officially Korean. 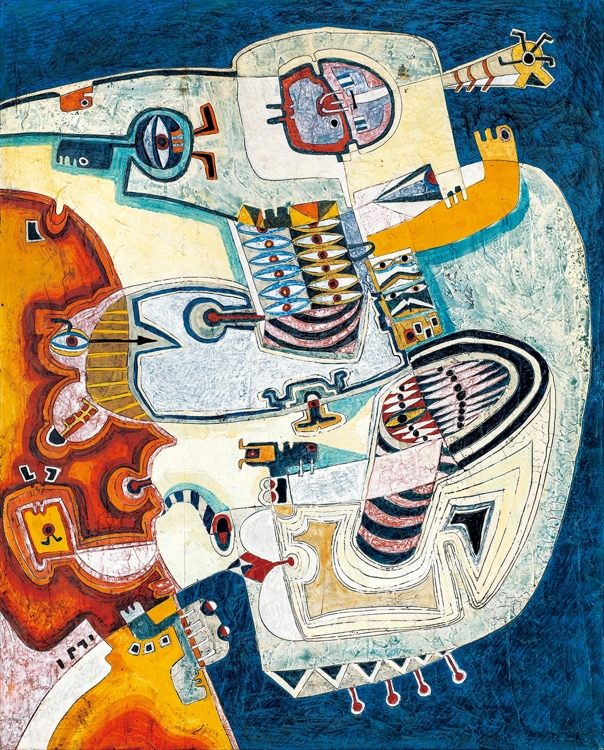 Another blow came in the early '60s when he suffered from severe tuberculosis. At 23, he had surgery to remove most of his right lung due to the illness and spent a few years desperately fighting against it.

During that time, the art high school graduate focused intensely on drawing. Sitting on a hospital bed, he drew landscapes, his surroundings and nature he observed through the room's window. The time alone made him explore more of his inner self and develop a stronger will to live.

The drawings laid the firm groundwork for his painting, which flourished for five years starting in 1964. He produced 37 abstract paintings created in his unique way of art making, which involved covering wood panels with plaster, resin and shell powder. When it hardened, he laminated the surface with wood glue. He then painted it with watercolors or acrylic and scratched the surface off with a nail to create abstract imagery. 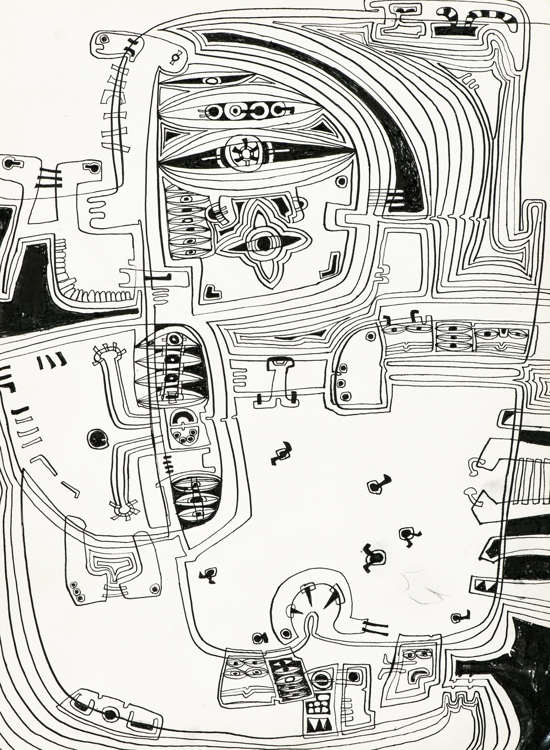 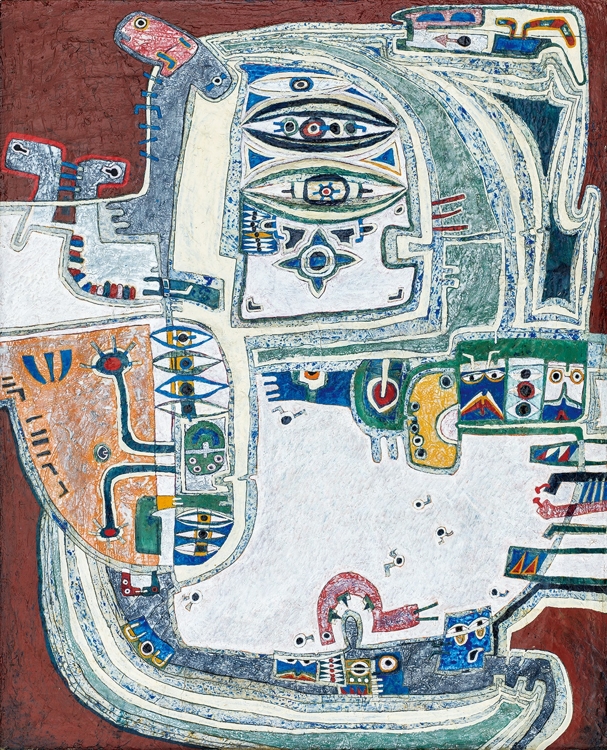 When he finally recovered from the illness, he stopped painting.

"I decided to seal off my world of painting for a while," he said. "They were the results of my sickness, hardship and suffering. They were the expression of my inner world. With the start of the '70s, I felt an urge to explore the outside world and do something more universal."

Moreover, he didn't want his paintings, too personal and emotional, to be misinterpreted in a new era swept up in a movement of conceptual art.

From the onset of the '70s, he engaged in photography, conceptual art, video, printmaking and performance. He explored the wider world, trying to seek a common ground between himself and his surroundings.

In the video "Self-portrait 78," he filmed himself rubbing his face against cracked glass in which his eyes, nose and lips appeared twisted and contorted. While looking silly at first, he expressed his deepest desire to overcome his uncomfortable identity crisis.

While nationality isn't important in doing art, he said, "Living in Japan, art was the only field where I could outperform Japanese. I had no choice but to concentrate on art."

On the question of what message he conveys through his paintings from the '60s, he ruminated for a while before finally answering: "Persistent life force. A will to live. People like me survived. So you can too." 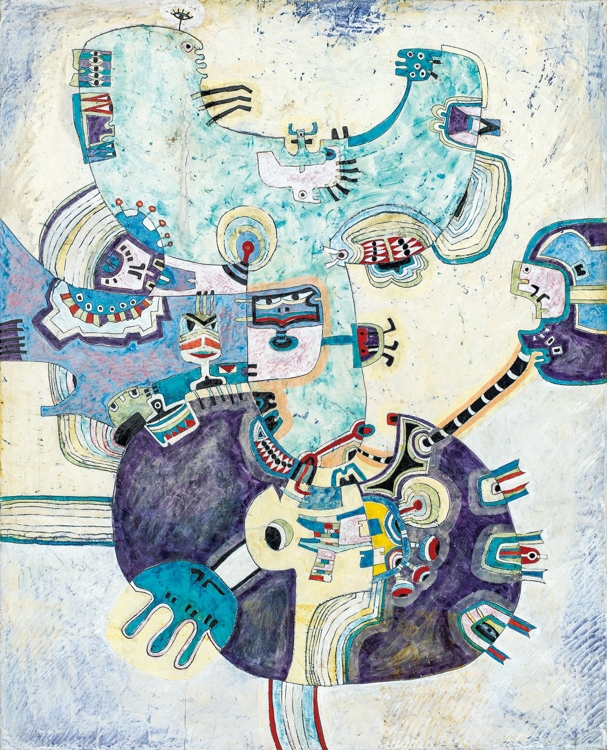