Choe, vice chairman of the central committee of the Workers' Party of Korea (WPK), appears to have become the director of the organization and guidance department, according to data provided by the Ministry of Unification.

North Korean state media reported last year that Choe, 68, was appointed a director of the party's department during a general meeting of the WPK's central committee in October 2017, without elaborating on which division he would lead.

A chief of the organization and guidance department is in charge of overseeing personnel policy at the WPK. Former North Korean leader Kim Jong-il, the late father of Kim Jong-un, took the post in 1973 and kept it until he died in late 2011. 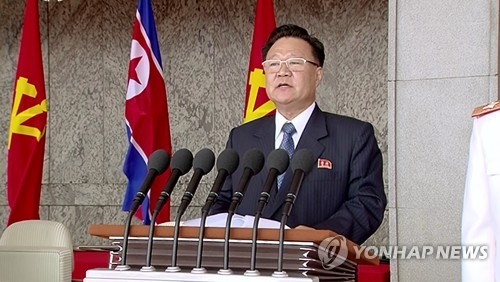 The ministry said that Jong Kyong-thaek is leading North Korea's spy agency, the Ministry of State Security. He replaced Kim Won-hong, who is said to have been punished after a party inspection.

Shin Ryong-man has become the head of Office 39, known as the WPK's special unit managing Kim Jong-un's secret funds. It is called the leader's "personal safe" for its role in raising and managing secret funds and procuring luxury goods.

The ministry said that North Korea's state agency in charge of inter-Korean affairs is placed under the North's cabinet.

In June 2016, North Korea upgraded the Committee for the Peaceful Reunification of the Country to a state apparatus from an offshoot of the WPK.

The agency's head is Ri Son-gwon, who led North Korea's five-member delegation to South and North Korea's high-level talks held at the border village of Panmunjom on Tuesday.