SEOUL, Jan. 11 (Yonhap) -- Cha Jun-hwan, who earlier this week dramatically grabbed South Korea's lone spot in men's singles figure skating for the 2018 Winter Olympics, said Thursday he plans to thoroughly prepare himself for the first Winter Games in the country.

In a neck-and-neck competition, the 16-year-old figure skater edged out his 21-year-old rival Lee June-hyoung on Sunday's final leg of the Olympic trials, by only 2.13 points. Cha's victory was not expected by many, especially as he had been suffering from pain in his ankle and hip.

The young skater opted to attempt only one quadruple jump, instead of two, in his free skate in a bid to avoid risks. The strategy was successful.

Considering his age, Cha had been considered a more likely prospect for the 2022 Winter Games in Beijing. The PyeongChang Games could be a chance for him to gain experience before he can really blossom in China four years from now.

"Although I should have a big goal for PyeongChang, I plan to focus on putting forth my best effort with the best program," said the young phenom during a press conference in central Seoul. "I have not set a specific goal in terms of scores or ranking for PyeongChang."

Cha said he hopes to gain a lot of experience through the Winter Games, and prepare for other future events as well.

"After it was confirmed that I'd made the Olympics, I took a break on Monday and had treatment at a clinic," Cha said. "One day later, I resumed my regular training."

He is set to depart to Canada this week to continue his Olympic training.

Brian Orser, who coached legendary South Korean female skater Kim Yu-na to her 2010 Olympic gold medal, will also be by Cha's side at the PyeongChang Games. Orser has been working with Cha since March 2015.

As was the case at the Olympic trials, Cha said he plans to refrain from moves that are too physically demanding.

"I may maintain the current level of difficulty in the program," Cha said. "If my injury improves, I may also come up with more complex programs after consultations with Orser."

South Korea had never won any medals in figure skating until Kim's record-setting performance in 2010. For male skaters, however, the Olympics still stands as an impregnable fortress, which Cha hopes to leap over soon.

Cha said he feels "burdensome" about his nickname as a "male Kim Yu-na," but continuously emphasized that he will aim to maintain his best condition for the PyeongChang Games.

The Feb. 9-25 PyeongChang Winter Olympics will be held in PyeongChang, located 180 kilometers east from Seoul, together with Gangneung, a sub-host city, which will be the main venue for ice sports. 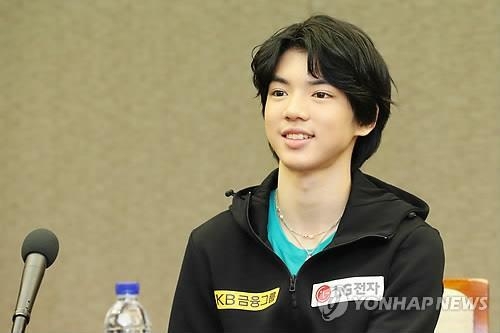