Around 200 airmen and the B-2 Spirits were recently deployed from Whiteman Air Force Base in Missouri to Andersen Air Force Base, Guam, the Pacific Air Forces said on its website.

It said the move is part of the U.S. Strategic Command bombers' regular rotation through the Indo-Asia-Pacific region.

"During this short-term deployment, the B-2s will conduct local and regional training sorties and will integrate capabilities with key regional partners, ensuring bomber crews maintain a high state of readiness and crew proficiency," the unit said. 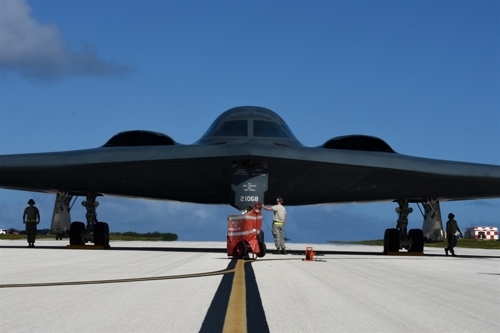 It did not disclose how long the bombers will stay in Guam, a strategically important island for the U.S. military amid North Korea's nuclear and missile threats.

The U.S. flew B-1B bombers from Guam over Korea last year in response to the North's provocations.

B-2 and B-1B are among the U.S. Air Force's three major bombers along with the older, non-stealth B-52 Stratofortress.