SEOUL, Jan. 11 (Yonhap) -- The South Korea-Japan feud over the wartime sexual mobilization of Korean women is a humanitarian issue that shouldn't have been put to political negotiations, the former head of a South Korean task force in charge of reviewing a 2015 bilateral deal on the matter said Thursday.

The remarks by Oh Tai-kyu came two weeks after the foreign ministry task force announced in its conclusion of the review that the 2015 deal was reached in a secretive manner under the previous Park Geun-hye government, with Seoul conceding to Japan's unfair terms and keeping them from the public domain.

The Moon Jae-in government later made a decision not to seek the renegotiation of what it called the "flawed" agreement. But Seoul will not use the 1 billion yen (US$8.9 million) relief fund that Japan paid under the 2015 deal, the government said, declaring that the sex slavery issue remains unresolved.

This rekindled the long-running rift with Japan over its history of forcing Korean women to work in front-line brothels for Japanese soldiers during World War II.

South Korea could have avoided getting entangled with the latest diplomatic rift with Japan, had it not put the issue to dealmaking, Oh said in a forum arranged by the Korea Press Foundation.

"Soul-searching on whether a universal human (rights) issue and a historical issue like the comfort women affair could be settled through negotiations should have made it possible to avoid it," the former journalist with a progressive newspaper said.

"Historians question how issues like this could be put to diplomatic negotiations and political concession. If (the previous government) had reflected on the point, it might have not gone for negotiations from the first," he said.

For the new South Korean administration, the decision to discredit the deal but not to revoke it may be the only option available, Oh also noted, alluding to the practical difficulties of breaking a formal diplomatic agreement with a foreign country.

"The most important point would be how South Korea will handle the 1 billion (yen) fund from Japan," the former chairman said in a forecast of Seoul's future handling of the issue. "The government needs to take enough time to listen to the victims, experts and civic groups, as well as to have sufficient consultations with Japan, in order to tackle the issue."

"It will be also useful for the government to remain ambiguous about its policy on the issue," he suggested, adding that the validity and implementation of such a deal could be handled separately. 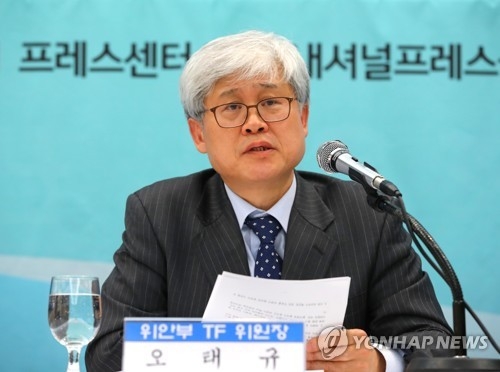