SEOUL, Jan. 12 (Yonhap) -- A rare performance by a North Korean art troupe will take place soon on the southern side of the tense inter-Korean border amid a mixed sense of curiosity and doubt over the North's intent, watchers said Friday.

After inter-Korean high-level talks Tuesday, North Korea agreed to send a delegation of athletes, cheerleaders, an art troupe, taekwondo demonstration teams, along with high-ranking officials, to the Feb. 9-25 PyeongChang Olympics in the South.

The next questions are what kind of performing group North Korea will dispatch to the South and whether their performances can burnish a more positive image for the country, they said.

"The North is using an art troupe as a card to win the hearts of South Koreans. Under sanctions, music performances could be a good tool for North Korea to weaken its image as a developer of nukes and missiles," said Ahn Chan-il, a North Korean defector and head of the Seoul-based World Institute for North Korean Studies.

Even before the two Koreas begin to work out details over the North's participation, media speculation is rampant over whether the Moranbong Band, an all-female band from North Korea, will come to the South.

The Moranbong Band was established in July 2012 by the North's leader Kim Jong-un, featuring Western-style music and outfits. 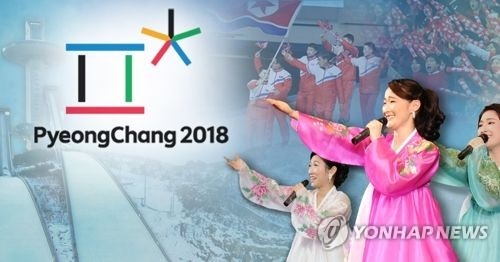 The band is known for their performances of the totalitarian state's propaganda songs, as well as Western pop music, including the theme song of the film "Rocky."

Hyon Song-wol, who is reportedly a former girlfriend of Kim Jong-un, is the leader of the band.

The Moranbong Band abruptly canceled a planned performance in Beijing in December 2015 and returned home.

The reason for that cancellation is not known, but a diplomatic source said that China had decided to send officials of lower rank to the concert in response to Kim Jong-un hinting that Pyongyang had developed a hydrogen bomb.

The North conducted its fourth nuclear test in January 2016, which it claimed was a detonation of a hydrogen bomb.

"I don't think the Moranbong Band will come to the South. But Hyon could lead an art troupe, which would probably consist of members from the country's several singing and performing groups," Ahn said.

In 2002, when inter-Korean ties were good, Pyongyang sent a cohort of some 30 singers and dancers from several musical and performance groups, including the Wangjaesan Art Troupe, to Seoul for a joint event to mark Korea's Liberation Day on Aug. 15.

Former leader Kim Jong-il ordered the creation of the Wangjaesan Light Music Band in 1983. The band features choreography and upbeat music, and was later renamed the Wangjaesan Art Troupe.

In addition to the Moranbong Band, the North's current leader also created the Chongbong Band, a light music group consisting of instrumentalists and singers. It made its debut at a joint concert held in Russia in 2015.

The State Merited Chorus, a North Korean military orchestra, often has held joint performances with the Moranbong Band. The chorus had been scheduled to perform with the band in Beijing in 2015 before the show was canceled.

One possibility is that North Korea's National Symphony Orchestra could come to Seoul. In February 2008, it held a joint concert with the New York Philharmonic Orchestra in Pyongyang, in a rare instance of cultural diplomacy.

North Korea dispatched its art troupe to Seoul for the first time in 1985, when the two Koreas held performances on each other's soil. In December 1990, the North sent 26 members of its national music group to Seoul for concerts. 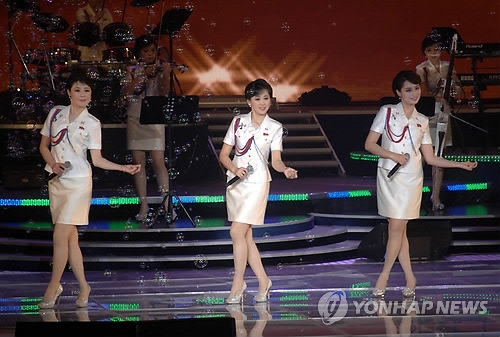