In a statement, Sheikh Ahmad Al Fahad Al Sabah, head of the Olympic Council of Asia (OCA), said the North's decision to take part in the PyeongChang Games, made during an inter-Korean meeting on Tuesday, is proof of "the power of sport to unite the world in an environment of peace, friendship and tolerance."

"This is a very positive start to the New Year for the global Olympic movement and for long-term peace on the Korean peninsula," Sheikh Ahmad said. "The OCA is heartened by the announcement on Tuesday and looks forward to seeing the flags of two of our member National Olympic Committees flying high together at PyeongChang 2018." 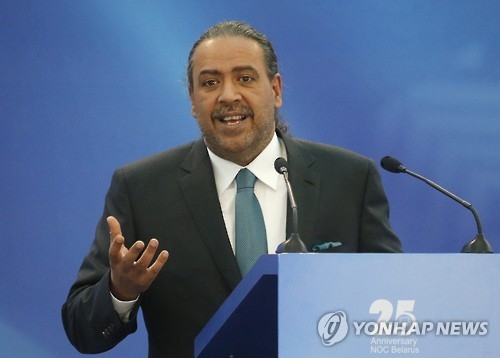 Sheikh Ahmad said he has fond memories of North Korea's participation in the 2014 Asian Games in the South Korean city of Incheon and how the North's presence generated much attention and interest among sports fans and the media.

The PyeongChang Olympics, the first Winter Games to take place in South Korea, will run from Feb. 9 to 25.

The International Olympic Committee (IOC) has set up a four-party meeting on Jan. 20 to be chaired by its president, Thomas Bach, with representatives from PyeongChang's organizing committee and the Olympic committees of the two Koreas on hand. Seoul and Pyongyang, meanwhile, are expected to meet again sometime next week for working-level talks to further discuss the North's participation.