SEOUL, Jan. 11 (Yonhap) -- The leaders of South Korea and China agreed Thursday to continue working together to peacefully resolve the North Korean nuclear issue, welcoming the result of the recent inter-Korean talks as part of such efforts.

"President Xi Jinping welcomed the improvement in the South-North Korea relationship as the result of high-level talks between the South and the North and said he actively supports President Moon Jae-in and the South Korean government to that end," Seoul's presidential office Cheong Wa Dae said.

The two leaders had a 30-minute telephone conversation two days after government officials from the divided Koreas held talks on the North's participation in the Winter Olympic Games in South Korea next month. The inter-Korean dialogue was the first of its kind since December 2015.

"The two leaders agreed to strengthen strategic dialogue and cooperation between South Korea and China so that inter-Korean dialogue will go beyond North Korea's participation in the PyeongChang Olympic Games and lead to the peaceful resolution of the North Korean nuclear issue and the establishment of peace on the Korean Peninsula," Moon's chief press secretary Yoon Young-chan said in a press release. 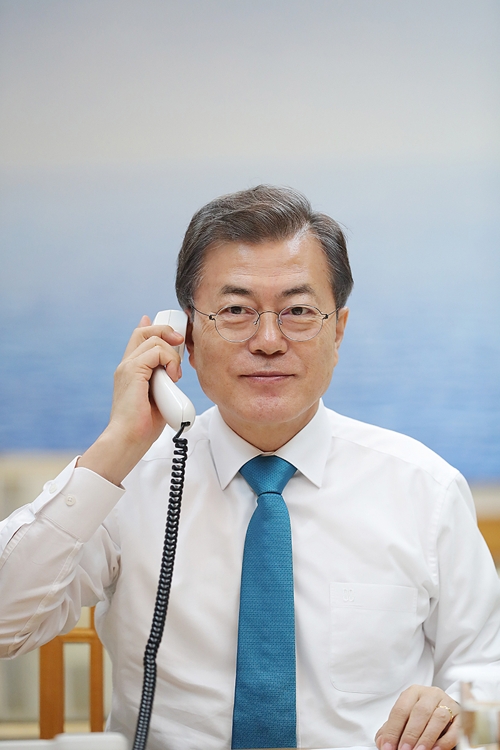 In an earlier phone conversation with U.S. President Donald Trump on Wednesday (Seoul time), the South Korean president insisted the resumption of inter-Korean dialogue may lead to the resumption of denuclearization talks with the reclusive North.

Trump agreed, saying his country may also be open to talks with Pyongyang if conditions are met, Cheong Wa Dae said earlier.

President Xi noted any improvement in the South-North Korea relationship must move forward simultaneously with progress in denuclearization of the Korean Peninsula, according to Yoon.

The phone call was first dialogue between the two leaders since Moon's state visit to China last month.

The leaders said Moon's trip was a great success.

"The two leaders expressed satisfaction over the fact that the people of the two countries are now beginning to feel the result of increased exchange and cooperation between the two countries following (Moon's) visit to China," Yoon said.

Moon invited his Chinese counterpart to the closing ceremony of the PyeongChang Winter Olympic Games, which will be held Feb. 9-25.

Xi agreed to work together to make the Olympics Games a success. Beijing is set to host the next Winter Olympic Games in 2022.