Jeju International Airport banned the use of its runways at 6:30 p.m. due to high winds and heavy snow but reopened an hour later after workers shoveled the snow from the airstrips.

Earlier in the morning, operation had been also suspended for three hours due to the storm, with 130 flights canceled and 30 delayed.

The temporary halts came as blizzards and cold slammed the southern part of South Korea.

Mt. Halla, the iconic central mountain of Jeju Island, got about 40.4 centimeters of snow and Seongsan, a southeastern county of the island, received 14 cm. South Jeolla Province experienced snowstorms for three days in a row. 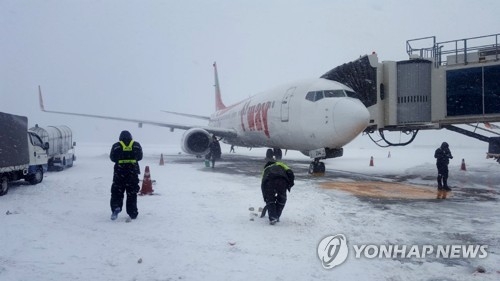